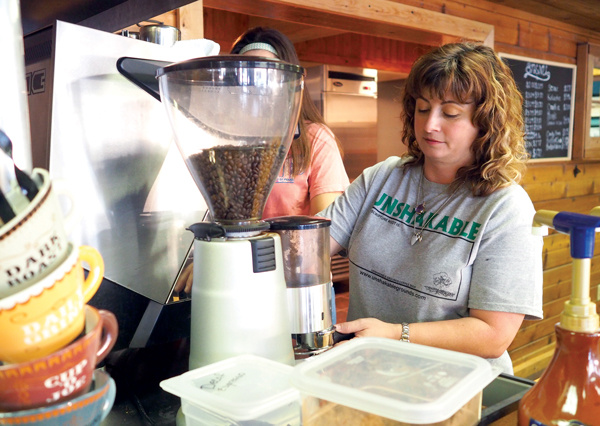 Cindy Brown, who co-owns Unshakable Grounds with her husband, Michael, makes a latte at the new Burnet coffee shop. The couple’s son, Joshua ‘J.B.’ Brown, died March 2011 in a car accident that started them on the road to opening the shop. The Browns plan to keep the shop open extended hours on Friday and Saturday nights to give teens a safe place to hang out. See more photos below. Staff photo by Daniel Clifton

BURNET — A simple comment from their son, Joshua "J.B." Brown, on March 17, 2011, about his friends' relationships with Jesus eventually led Michael and Cindy Brown to open a coffee shop on the courthouse square in Burnet.

But it was tragedy three days later that really propelled the couple to start Unshakable Grounds.

"He was killed in an accident in 2011," Cindy said. "And three days before he died, he told me his friends really needed Jesus in their lives. That's how this really came about."

Joshua and Robert Hunter Colvin died when the vehicle in which they were traveling rolled over before striking a tree on FM 2342. Robert was 17 and a junior at Burnet High School, while Joshua was 18 and had graduated from Burnet in December 2010. Joshua was looking forward to going into the Navy after he had been accepted into the nuclear program.

It was a tragedy that could easily tear a family apart, but the Browns and daughter Jordan found a way to create something positive from the accident.

While Unshakable Grounds is a coffee shop, featuring all coffees, food and other coffeehouse fare, the Browns see it as an extension of their love for Joshua into the community.

"He would say that there really isn't anything for teenagers to do on weekend nights," Cindy said. "So we'll stay open later on those nights — but not past midnight — to give kids a place to come and hang out."

It's a place, the couple said, where anyone can relax and just be accepted.

Cindy pointed out she’s never seen a fight in a coffee shop. Instead, though people of different backgrounds, opinions and beliefs may frequent the same establishment, they tend to enjoy good discussions rather than angry confrontations. While it’s not a church-run coffee shop, the Browns’ faith in Jesus fills the business located at 134 S. Main St. And Cindy wants people to understand that’s part of the mission of the shop and her family: sharing the love and grace Jesus taught.

She knows the power is very real. She witnessed it the day of her son’s funeral.

“At this funeral, 50 of his friends accepted Jesus,” Cindy said. “It was amazing.”

The journey from that day to April 9, the first day Unshakable Grounds was open, took time and wasn’t clear cut. But Michael said God kept pointing — sometimes nudging and other times shoving — them to the coffee shop. With more than 20 years in a semi-conductor business in Austin, Michael brought with him a lot of organizational skills. (Plus, he can fix the coffee machine when it breaks.) But he wasn’t quite as sold on the idea of going all in on Unshakable Grounds.

After losing his job, Michael, based on conversations with a friend, figured it wouldn’t be long before he found more work in the semi-conductor industry.

“But the phone calls never came,” Michael said. “God just closed all those doors but left this one open. This was where he wanted us to go.”

Though the Browns own the business, they see it as a community coffee shop.

“People have been so amazing helping us out,” Cindy said.

The staff are only working for tips until the shop begins making money. Friends from church have jumped in to help when needed.

Their story hasn’t gone unnoticed beyond the shop or church walls. Mark Kidd of the Lake Area Rods and Classics car club was going business to business inquiring if owners would be interested in the organization holding a car show on the square. It was during these visits when he met the Browns and heard their story.

One idea he and club members are floating around is holding “cruise-ins” during which members would pull up in their classic cars and rods at Unshakable Grounds on some weekend evenings and let the teenagers check them out.

“They’re doing such a great thing, you know, reaching out to the kids,” Kidd said. “We just want to do something to help them.”

On April 14, Kidd, wife Cindi, and Don and Barb Weber — all part of the club — showed up with some special wall art for the coffee shop. They presented the Browns with a 1964 Ford Fairlane Thunderbolt’s tear-drop hood scoop — signed by all the club members.

Cindy Brown just pointed out that it’s just another way the community is embracing the coffee shop and its mission.

“Jesus is written in the foundation and in the walls,” she said. “It’s almost like God trained us for this. We just want a place where people can come in, get to know their name and get to know their story. Because you’re supposed to do life together, not just wave at each other on the way to the mailbox.”

Go to unshakablegrounds.com for more information about the coffee shop.

I'm looking forward to a cup of coffee at Unshakable Grounds.

Keep doing it the Jesus way. He is smiling down on y'all and has a bigger plan than you can imagine. Love the story and theme. I have moved away from the area but miss the sense of love community and fellowship you only find in the Hill Country. God bless you all

Thank you. So excited to see and experience all God has planned. <3