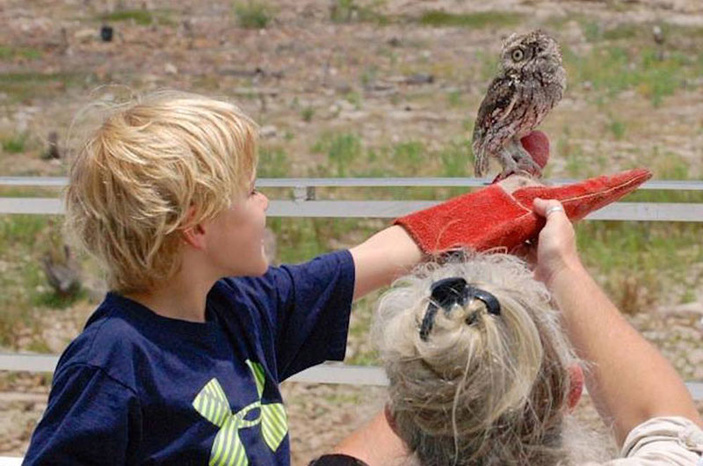 A lucky passenger aboard a Vanishing Texas River Cruises Freedom Flight Cruise on Lake Buchanan helped release a small owl. The next cruise with rescued birds of prey from Last Chance Forever conservancy in San Antonio is November 17. Courtesy photo

At least three rescued birds of prey will be released during a Vanishing Texas River Cruises Freedom Flight Cruise on November 17.

The 2½-hour round trip goes up the Colorado River from Lake Buchanan, leaving at 11 a.m. Sunday from the cruise service's dock, 443 Waterway Lane in Burnet.

The rescued birds have been rehabilitated by Last Chance Forever, a bird of prey conservancy in San Antonio.

“We really are their last chance,” said Kelly Rayner, the nonprofit’s general manager. “These birds are found injured or orphaned in the spring. They are important. They are beautiful, and they are indicator species for the environment.”

Last Chance Forever releases in several places across the state but especially values the Buchanan Dam area for its seclusion, access to easy food, and one particular set of human eyes who keeps watch: Shawn Devaney, longtime captain at Vanishing Texas River Cruises.

“Captain Shawn is out in his boat all the time,” Rayner said. “If any of these birds get into trouble, he lets us know, and we can go out and see what the problem is.”

One year, Devaney noticed that an eagle was sitting in the same spot over a number of days and worried it was sick. Last Chance Forever checked on the bird, found a pile of fish bones in the spot, and realized it was just its favorite place to dine.

Tickets for the cruise range from $37.19 to $48.75 and can be purchased in advance online. The higher-priced tickets include lunch.