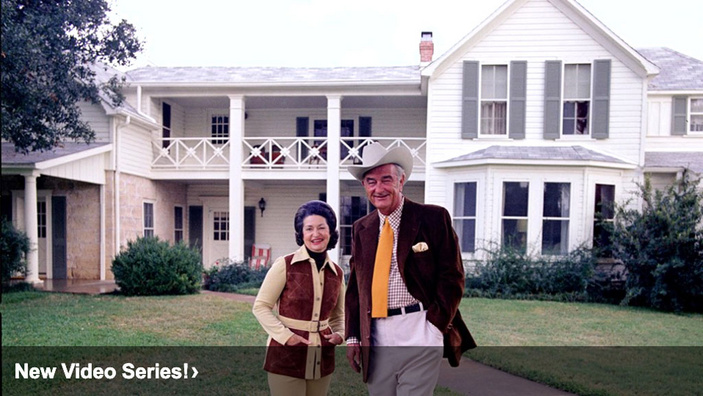 A promotional image with President Lyndon B. Johnson and wife Claudia 'Lady Bird' Johnson in front of the Texas White House in Stonewall. Image from the LBJ National Historical Park website

The National Park Service and Lyndon B. Johnson National Historical Park have launched "Texas White House: Past, Present, and Future," a series of short educational videos on the history and importance of the Texas White House and LBJ Ranch.

All videos can be viewed on the park's Facebook page with the last one posted Thursday, Aug. 25, the 106th anniversary of the National Park Service.

The first three episodes highlight the history of the park's land, from Native American inhabitants to the purchase of the ranch home by President Johnson and first lady Lady Bird Johnson in the 1950s. It was called the Texas White House because the president sometimes conducted national business there.

The last two episodes cover the National Park Service’s efforts to open the home to the public in 2008 while addressing the challenges of protecting and preserving historic buildings and landscapes. The very last episode also highlights the structural and environmental issues that led to the home’s closure in 2018 and the service's efforts to rehabilitate it.

“We’re excited to educate visitors through this short video series that shines a light on the Texas White House Complex, its history, how it is utilized today, and the National Park Service’s historic preservation mission," stated Vanessa Torres, program manager of interpretation, in a media release from the NPS on the video series. "Lyndon B. Johnson National Historical Park seeks to engage visitors through a variety of methods, both virtually and on site." The park will receive about $9.1 million to rehabilitate the Texas White House, nearby communications buildings, and the surrounding site, according to the media release. Crews will replace outdated electrical, mechanical, HVAC, and alarm systems; stabilize the building’s foundation; and repair internal/external separation walls. The project also includes incorporating sustainable practices, public safety upgrades, and accessibility improvements so the facility can serve more visitors and withstand extreme weather.

The LBJ National Historical Park includes the Visitor Center, LBJ Boyhood Home, and Johnson Settlement on Ladybird Lane in Johnson City and LBJ Ranch and the Texas White House located off of U.S. 290 near Stonewall. Visit the park's website for directions.

"Walk in the footsteps of President LBJ" at the national park and the LBJ State Park and Historic Site.

A wreath-laying ceremony and more take place Aug. 27 at the state and national parks in honor of President's Johnson's birthday.