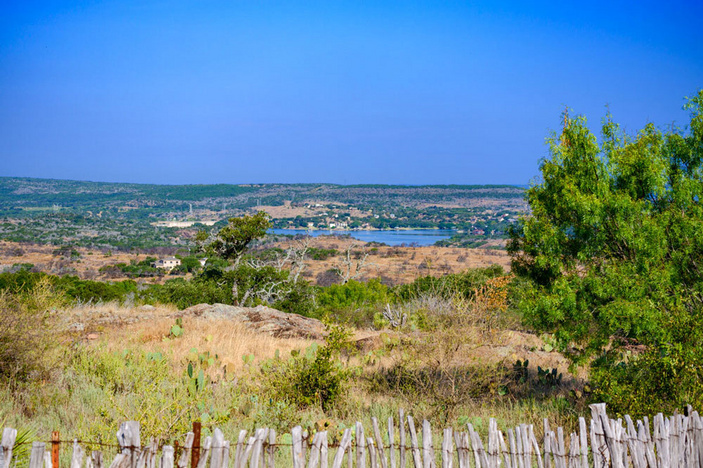 A view of Inks Lake off of Hoover Valley Road in August 2019. Staff photo by David Bean

Summer and winter in the Highland Lakes look much the same with brown grasses and barren branches. The rocky landscape is dotted with evergreen cedar trees interspersed with prickly pear, live oak, and mesquite.

In the background, Inks Lake is a splash of blue against a concrete dam of the same name, which holds back the Colorado River as it slowly flows from the Llano Estacado south of Lubbock through the Texas Hill Country, forming the six Highland Lakes, and eventually to the Gulf of Mexico.

The landscape speaks of history and is not much changed since settlers first drove their wagons into the area after the Texas Revolution. Much of the acreage, including the old Lacy Ranch and Granite Mountain in Marble Falls and Moss Ranch and Enchanted Rock in Llano, were deeded to veterans of the Texas Revolution, when self-named Texicans won independence from Mexico.

Several members of the Inks family still live in Llano and Buchanan Dam, some on the Moss inheritance handed down from the merging of those two families in the early 1900s.

In the foreground, cedar fence posts tied together with barbed wire do more good keeping trespassers off private property than livestock in. Uneven rock outcroppings and a lack of water at this altitude make the land unaccommodating to anything but the wildest of wildlife.

Cedar and barbed wire fencing cordoned off those Texas Republic land grants in the mid-1800s, helping form settlements such as Burnet, Marble Falls, and Llano.

Cedar, also known as ashe juniper, mountain cedar, post cedar, Mexican cedar, or blueberry cedar, is a native species that prefers rocky, shallow, calcium-rich soil. Many people hate it for its allergy-inciting pollen, its water hogging in a dry landscape, and its highly flammable natural oils that burn fast and hot and are easily ignited.

Cedar also provides habitat for wildlife and can’t be clear cut as it is the home for two endangered species: the golden-cheeked warbler and the black-capped vireo. The trees also prevent erosion and will grow as natural boundaries and greenery where other plants will not.

Like it or not, cedar is here to stay. It’s been here since the Ice Age ended 10,000-13,000 years ago. You know that’s a long time past when a few thousand years difference makes very little difference.

As for Inks Lake and the dam that made it, they’ve only been around since 1938.