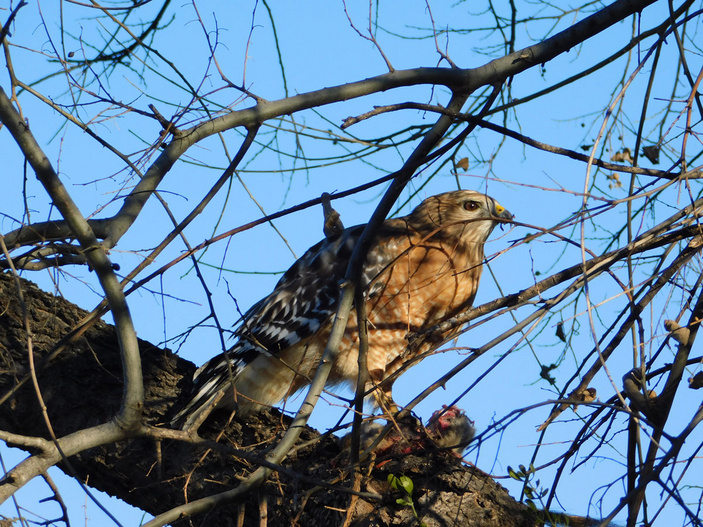 This photo of a red-shouldered hawk eating a meal was taken near Lake Marble Falls at the entrance to Meadowlakes in January 2020. Staff photo by Jennifer Greenwell

Look up into the blue skies on a Texas Highland Lakes day and you might catch sight of a red-shouldered hawk floating with its wings spread wide on a warm air thermal. These raptors are also often spotted on trees and powerlines stock still in hunting stance, waiting for prey to make a wrong move.

The majestic birds are partial to the wooded areas around the Highland Lakes, where they find plenty to eat and room to build their nests.

Red-shouldered hawks are family-oriented, most mating for life. They return to the same nests year after year and often live up to 14 years in the wild. Although they pair up, they are rarely seen together or in groups. When two or more hawks spiral together, it is called a boil of hawks. When flying in large numbers, the flock is called a cast or kettle.

The most common hawk, or buteo, in North America, red-shouldered hawks are well-known in the Edwards Plateau area, which includes the Highland Lakes and Central Texas.

They are easy to discern from their closest cousins, the red-tailed hawks, by their dark-chestnut-and-white-checkered wings and warm-reddish barring across their breasts. Their tails are black with narrow white bands.

Pale crescents near their wingtips are easily spotted in flight. They glide with wingtips pushed slightly forward so it appears they are reaching for something as they soar.

When a red-shouldered hawk cries out, you might think you're hearing an eagle. Hollywood often uses the hawk’s cry when showing an eagle because it is so loud and distinctive. Eagles are not nearly as vociferous.

As a member of the raptor family, hawks are protected by federal law, so don’t take aim at one. You can’t even own parts of their bodies, such as talons, feathers, or nests, even if you come across a dead bird on the side of the road. Violators can be fined up to $500 or sentenced to as many as 60 days in jail for hawk feathers. Eagle feather fines are sizably higher.

Much better to shoot them with your camera, and since the hawks are plentiful in the Highland Lakes, keep it handy when you’re going anywhere near the water.