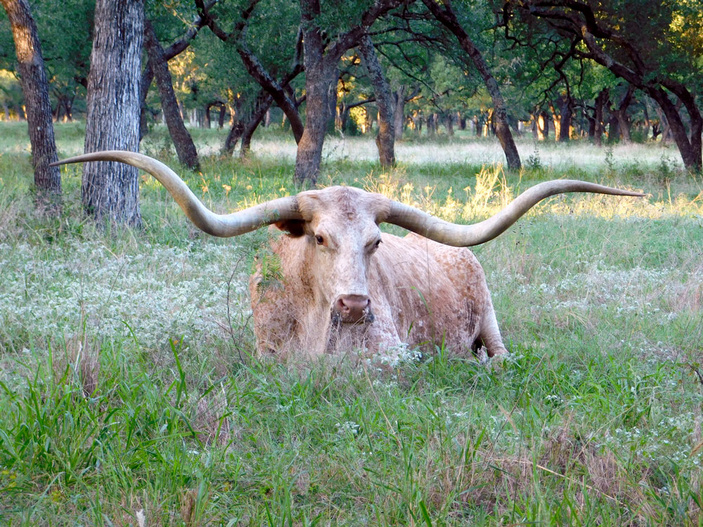 Texas longhorns can be seen across the Highland Lakes. The breed is a favorite of ranchers, who value it for its lean meat, resistance to disease, and adaptability to Texas weather. Staff photo by Jennifer Greenwell

Texas longhorns epitomize the pioneer spirit of the Southwest, specifically Texas, where part of the official State of Texas Longhorn Herd can be found at Lyndon B. Johnson State Park and Historic Site near Johnson City.

As early as 1690, Spanish conquistadors drove the first herd of cattle into Texas from Mexico. Those were not actual longhorns but Spanish Retinto (Criollo or Creole). In the 18th century, the Spanish stock was bred with English Bakewell cattle, which came to Texas by way of the Ohio Valley and Kentucky, and developed into what we now know as the longhorn.

The Texas longhorn took its boxy shape and distinctive patches of orange and red on white from the English stock. The horns, which early on averaged 4 feet across but grew over the years, came from its Spanish ancestors.

By the time of the Civil War (1861-65), the Texas longhorn was easily recognizable with horns measuring 9 feet or more across. Both males and females grow horns.

Longhorns roamed free across the plains of Texas after the men who herded and bred them were called to battle. Millions of them went unbranded and unclaimed until after the war.

Within 40 years of the Civil War's end, the longhorn was on the brink of extinction. In 1927, Congress stepped in to help preserve the breed. In 1964, the Texas Longhorn Breeders Association of America formed to do the job long term.

The longhorn has since become a popular breed because it is resistant to disease, is highly fertile, calves easily, can survive in just about any environment, and produces a lean, tasty meat.

The lack of supervision over the years is credited with the breed’s unique look and durability.

“Had they been registered and regulated, restrained and provided for by man, they would not have been what they were,” wrote J. Frank Dobie in his iconic book “The Longhorns,” published in 1941 by the University of Texas Press. Dobie, in fact, organized longhorn supporters to procure a herd and donate it to the Texas Parks Board in 1941. Many of the descendants of that herd now live at LBJ State Park.

No stranger to the Highland Lakes, Dobie was once owner of Cherry Creek Ranch in Spicewood.

Dobie was not the only Central Texan inspired by longhorns. The university where he taught adopted the animal as its mascot, bringing the first live version to the traditional University of Texas-Texas A&M University Thanksgiving Day football game in 1916. According to one story, he was tagged Bevo by a sports reporter and ended up on players’ dinner plates after the end of the first World War.