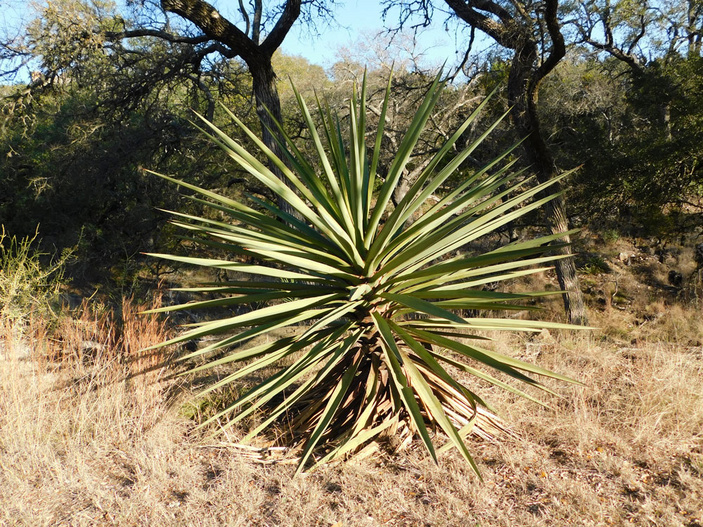 The Spanish dagger is the only tree yucca found east of the Pecos River. Staff photo by Jennifer Greenwell

Texas is home to more than 30 species of yucca, a perennial evergreen as much a part of Highland Lakes horticulture as the bluebonnet.

Yuccas are prized for their ability to withstand extreme conditions, including scorching heat, icy cold, wet, and dry. Often grouped with succulents, yuccas have thick, waxy skin that allows the plant to hold water. The concave shape of the leaves act as channels funneling water to the base of the plant, where it is stored in the roots. As yucca leaves die, they stick around. Dead leaves hang down rather than fall off, shielding the trunk from heat evaporation and funneling more water to the ground.

Members of the asparagus family, when a yucca blooms you know it. Many yuccas produce a tall, slender stalk that flowers high at the top with showy, white bell-shaped blooms. Those are the yuccas most prevalent in the Highland Lakes.

Others, such as the Spanish dagger bloom with a thick, dense, stem of white flowers perched just above the leaves at the top of the plant. Once mature, yuccas usually bloom from mid-summer through early fall. Although they do not necessarily bloom every year, they do bloom several times in a lifetime. The white, tender blooms are a favorite treat for deer. 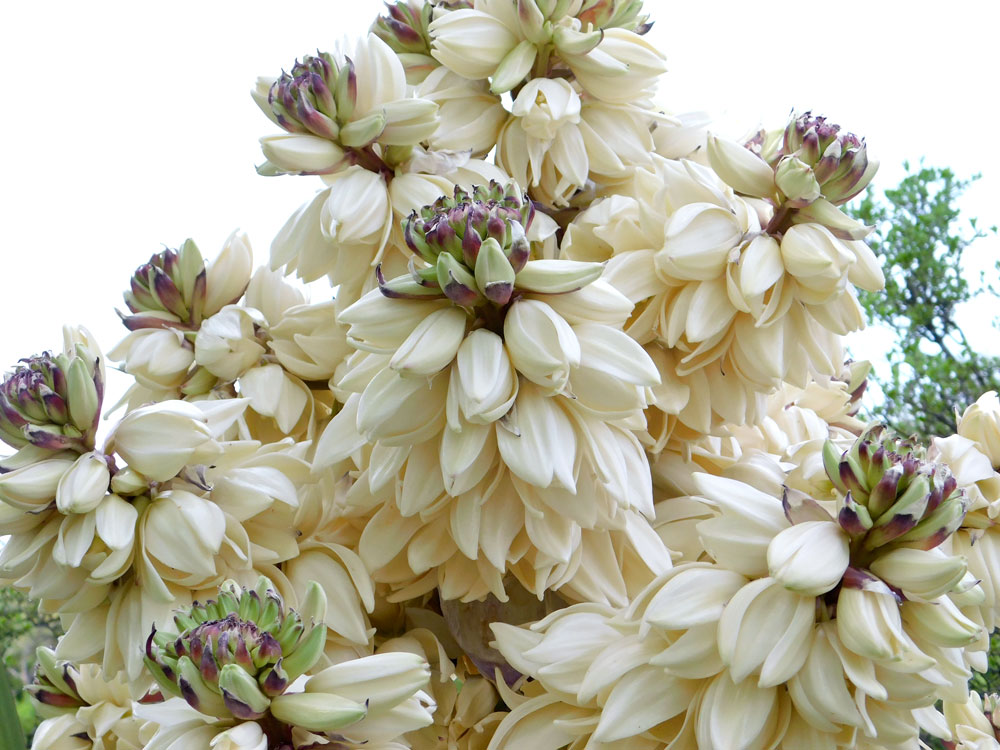 Spanish dagger, also known as trecul yucca and palma pita, is the only tree yucca found east of the Pecos River. Spanish dagger plants in the Highland Lakes are of the shorter variety — the closer to the Texas coast, the taller and more tree-like they grow. The leaves of the Spanish dagger live up to the name. They are stiff, concave, long, and have an extremely sharp tip capable of puncturing flesh.

The Texas yucca, with its twisting leaves, is endemic to the Edwards Plateau region of Texas. Also known as the twisted-leaf yucca, it is a low-growing plant with softer leaves. The twisting leaves are believed to be an adaption to better collect rainwater.

The Buckley yucca is a native that grows mainly in the Edwards Plateau and is easily identifiable with its frayed appearance. Curling, white fibers are seen along the edges of its stiff, narrow, sharp leaves.

A puncture from the needle-like yucca tip can cause pain and swelling lasting up to a week. The plant contains toxins called saponins, which cause a reaction in many and damage red blood cells.

Native Americans used nearly every part of the yucca plant: trunks for fences, leaves for thatching, flowers for eating, fibers for twine and cloth, and roots for soap. The plant was used medicinally as treatments for ailments such as arthritis, inflammation, skin injuries, and to stop bleeding.

The flavor of a yucca bud is said to be comparable to cauliflower.

The plant known as red yucca is not actually a yucca. It is, however, a member of the century plant family and is yucca-like.