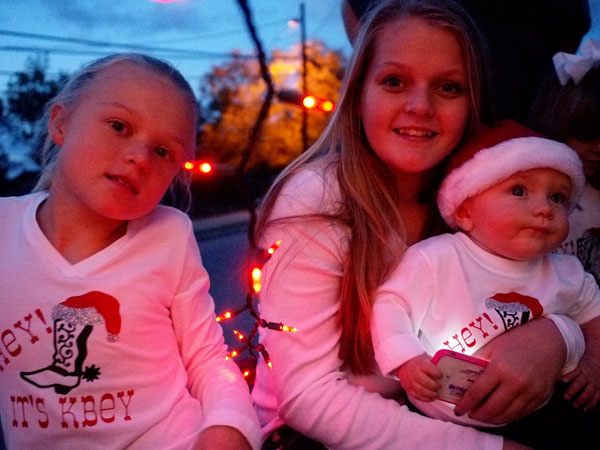 Tatum (left), Mikah and Ranger Hopkins enjoyed last year’s Walkway of Lights Light-up Parade. The parade returns Nov. 20 at 6 p.m. It courses down Main Street in Marble Falls to Lakeside Park on Buena Vista Drive, where officials will flip the switch to the 2015 Walkway of Lights. Everybody is invited to come out and enjoy the parade and official lighting. Staff photo by Daniel Clifton

MARBLE FALLS — With Christmas fast approaching, the Highland Lakes is putting on its festive colors, and nowhere is that more true than at the annual Walkway of Lights on the shores of Lake Marble Falls.

But before officials flip the switch to set Lakeside Park aglow, people line Main Street in anticipation of the Walkway of Lights Light-up Parade.

The parade, which starts at 6 p.m. in Johnson Park along Avenue J, gets everyone in the mood for Walkway of Lights with lighted floats that course their way along Avenue J before turning east toward Main Street.

Once on Main Street, the line of lighted floats, walkers and more heads south through town.

Along the way, folks line the street, often crowding right up to the floats.

The excitement permeates the parade route in anticipation of the official Walkway lighting.

This year marks the 25th anniversary of Walkway of Lights. Bill Rives, executive director of the Marble Falls/Lake LBJ Chamber of Commerce, said they’ve invited 58 people who helped get the Walkway of Lights going to serve as parade grand marshals.

They’ll ride in the lead float. (It will probably have to be a rather large one if the majority of the people invited show up.)

But it’s a great opportunity for the community and Walkway of Lights fans to come out and say “thanks” to those who had the foresight and drive to start the event — and to keep it going.

Along with the grand marshals and the line of floats sponsored by a host of local organizations, word has it that Santa Claus himself is attending. He often brings up the rear of the parade before heading for the lights display where he’ll take his place on his chair. It’s a great chance for kids to tell the Jolly Ol’ Elf what they have on their Christmas lists.

The parade culminates at the end of Main Street at the entrance of Walkway of Lights on Buena Vista Drive in Lakeside Park.

When everybody gathers around, officials will flip the switch for the loud “aaaah” that arises from the crowd as the lights illuminate the night.

There is no charge for admission, but donations are always appreciated.

Walkway of Lights is open nightly from 6-10 p.m. Nov. 20 through Jan. 1, 2016. Go to walkwayoflightstx.com or check out the Walkway’s Facebook page at facebook.com/walkway-of-lights-marble-falls for more information.

Our girl scout troop 307 is super excited to be part of the parade. Also, extremely ready for the lighting!! Can't wait!