What to know before you light campfires in the Highland Lakes 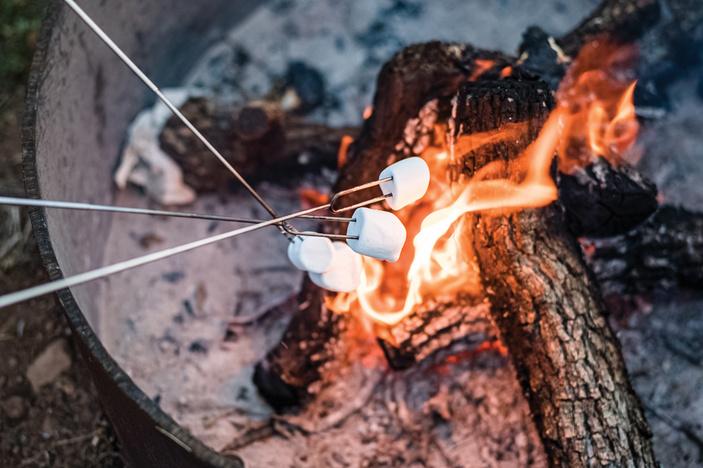 A campsite is not complete without toasting marshmallows over a fire. Check the rules of our campground before lighting a fire. Photo by Ronnie Madrid/Divine Radiance Photography

What to know before you light campfires in the Highland Lakes

A campfire creates community. After a day of swimming, hiking, fishing, and general play around the campsite, a lighted fire at dusk recenters your disparate team of travelers around its dancing flames and promise of warmth, food, and companionship.

In the Highland Lakes, most campgrounds, including state and Lower Colorado River Authority parks, allow — and often provide — pits for campsite fires. You can always bring your own firepit. The best practice is to check the rules at your chosen campsite when you make the reservation.

In Inks Lake State Park, fires may be built only in campsite grills, fire rings, or fireplaces. Most developed campsites have fire rings, and some have waist-high grills. Campfires are not allowed at most primitive campsites.

In Enchanted Rock State Natural Area, which straddles Gillespie and Llano counties, fires are prohibited in the primitive camping areas. The walk-in campsites with water provide a fire ring and an outdoor grill.

Campfires are strictly prohibited when burn bans are in place, which are enacted by county and city officials.

Firewood is usually available at convenience stores near parks, but it never hurts to bring your own to be sure you have what you need to end a perfect day in the Highland Lakes around the cozy comfort of a campfire. Don’t forget the graham crackers, chocolate, and marshmallows.

In the dry climate of the Texas Hill Country, the safest way to contain and enjoy a campfire is by using a firepit. Many Highland Lakes campsites provide metal firepits. At others, campers need to bring their own.

Here’s how to start a comforting campfire inside a woodburning firepit.

How to properly put out a firepit

Girl Scouts get the credit for inventing s’mores, which they originally called “some mores,” according to a news article printed in the Sept. 9, 1925, issue of The Norwalk Hour.

Since that fateful day, fans and fanatics have altered and added ingredients. Here are a few suggestions from smorescout.com, a s’mores-focused website.

This could have happened in the Texas Hill Country ...

Back in the olden days, a man and his wife were traveling home by wagon on a lonely stretch of road when it started getting dark. Off in the woods, they spotted a small cabin with a light in the window and decided to stop and ask for a night’s lodging.

They knocked at the cabin door and were invited in, fed a good supper, and offered a bed for the night. The guests tried to pay the hospitable couple, but the cabin owners said no.

The next morning, the travelers got up early to continue their journey, and they decided to leave a silver dollar on the kitchen table as a way of saying thanks.

When they reached the next town, they stopped to have breakfast at a small café. They told the café owner what a pleasant evening they’d spent with the kind couple in the cabin in the woods.

The café owner looked surprised and asked them to describe the cabin and the people living there. When they did, he said, “No, that cannot be! That’s the Foster place. It burned down two years ago, and the Fosters died in the fire.”

“Well, they were alive last night,” the traveler said.

So, they all three climbed in the wagon and drove out to the cabin, surrounded as it was by thick underbrush, and, sure enough, only a few burned timbers marked where the cabin once stood. As the wife moved closer, however, she screamed and fainted dead away in her husband’s arms. The men looked to see what had alarmed her, and there on the charred remains of the kitchen table lay a silver dollar.