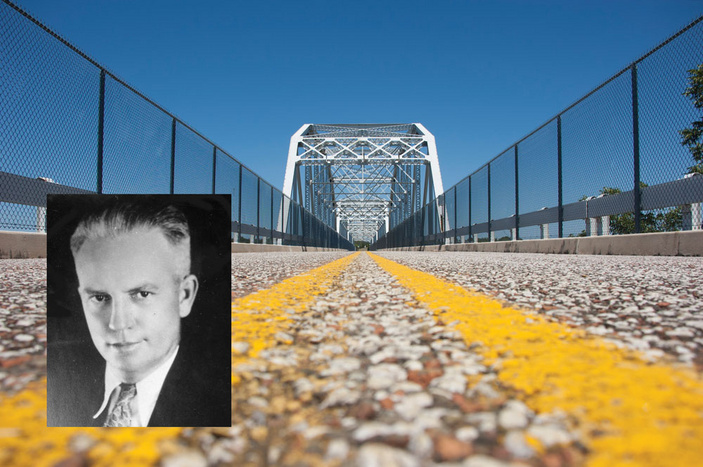 Roy Banford Inks' family name can be found across the Highland Lakes, including on the Inks Lake Bridge on Texas 29. Staff and courtesy photos

A lake, a dam, a bridge, all named for Roy Banford Inks, a three-time Llano mayor who served on the first board of directors for the Lower Colorado River Authority.

The progenitor of a storied Llano County family, Roy Inks died on August 4, 1935, the day before his 46th birthday. His death from appendicitis and pneumonia came within days of returning home from Washington, D.C., where he was part of the Texas delegation of officials that procured the funding to restart — and finish — construction of Buchanan Dam.

A Llano merchant, Inks was among the many locals who felt the pinch when, during the heart of the Great Depression, the company building the dam went bankrupt. Construction workers had moved their families into the area, creating an economic boom. They were now starving with nowhere to go and no means to get there. Llano merchants were suffering, too.

Matters got worse after President Franklin D. Roosevelt shut down the nation’s banking system on March 6, 1933. The bank where Inks kept his money, The National Bank of Llano, went into receivership and never reopened. His bank accounts, which included his Ford dealership and the store where he sold Stromberg-Carlson radios and Kelvinator refrigerators, were frozen along with just about everyone else’s. He set his sights on getting the dam back on track.

It took more than a year of trips back and forth to Austin and eventually to Washington, D.C., where Texas Congressman James P. “Buck” Buchanan, chairman of the House Committee on Appropriations, saw to it that the dam money came through. It took redrawing Buchanan’s congressional district to include the dam and renaming it for him.

Construction on the dam that bears Inks' name began in 1936. It was completed in 1938. The dam separates Lake Buchanan from the Colorado River arm of Lake LBJ. Inks Lake State Park takes up most of the land on the east side of the lake. On the other river that feeds into Lake LBJ, the Llano River, is the Roy B. Inks Bridge, part of Texas 16 where it crosses the water into downtown Llano.

Originally known as the Llano Bridge, it washed out in June 1935, two months before Inks died in a San Antonio hospital. When its replacement was completed in September 1936, it bore Inks’ name. It was that flood that spurred the LCRA delegation to Washington for a final push for money.

As interesting as all of these facts about Roy B. Inks are, none of them captures the essence of the man who created the first fire department in the area, converted one of his Model Ts into the first local ambulance, and introduced the first moving pictures at the original Opera House. As mayor, he began the city’s first street paving program.

An obvious innovator, he had a talent for marketing, driving one of his showroom autos up Enchanted Rock to prove the strength of the new transmissions that Ford Motor Company was building. To prove that “even women” could drive this new car, he put his 12-year-old daughter, Mildred, behind the wheel and had her drive through town.

Roy Banford Inks was born in Hoover’s Valley in Burnet County but moved to Llano as a child to live with an aunt and uncle. He began his career as a traveling salesman selling seeds then groceries wholesale before joining the Army during World War I.

After the war, he returned to Llano, where he married Myrtle Moss, whose ancestors are embedded in Llano County history. Myrtle’s grandfather Matthew Moss received 4,600 acres of land after fighting under General Sam Houston in the Battle of San Jacinto on April 21, 1836.

Their two children have success stories of their own. Daughter Mildred Inks Dalrymple was awarded a Congressional Gold Medal in 2010 for her service as a Women Air Force Service Pilot during World War II. She was a second lieutenant.

Her younger brother, Jim Moss Inks, was a B-23 navigator during the war. He was shot down over German-occupied Yugoslavia, evading capture for 11 months. He joined the “Chetniks” resistance fighters and kept a diary of his experience.

Those notes turned into a book, “Eight Bailed Out,” which became a bestseller and a Book of the Month Club selection in 1954. Jim Inks also flew combat missions in the Korean War, receiving 21 medals.

After retiring from the Air Force, he returned to Llano, where he took over the family ranch and went into ranch real estate.

Jim Inks and his wife, Elsie Cloud Young, had two children, who still live in the Llano area. Roy Banford Inks II, 74, and his wife, Petey, live on Inks Ranch, which his two children oversee. His sister, Suzanne Inks, 72, lives in Buchanan Dam.

Roy Inks II served in the Navy before going to work for the Texas Parks and Wildlife Department, where he spent 30 years as a contracting specialist. Two of the parks he was in charge of were Inks Lake State Park and Enchanted Rock, which, at one time, was part of Moss Ranch on his grandmother’s side of the family. In fact, Inks Ranch was Moss Ranch until 1966.

Inks II worked the ranch for 16 years. In 2014, he suffered a spinal injury that left him an incomplete quadriplegic.

“Everybody thinks Inks is where the heritage is,” he said. “They came over from Hoover Valley sometime after the Civil War (1861-65). We were here in Llano in 1857 as the Mosses. The Moss heritage is the land. The Inks heritage is from my grandpa, the shaker and mover who got into public service.”