Masters Swim Program at Burnet YMCA for Ages 18 to 100, All Levels 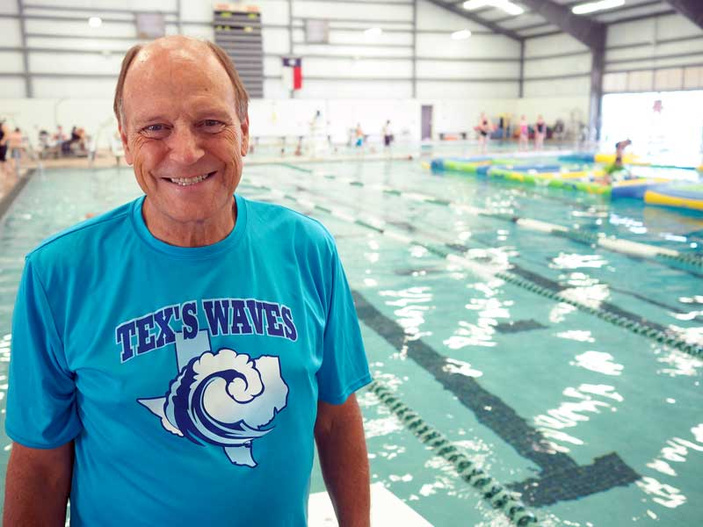 YMCA of the Highland Lakes at Galloway-Hammond swim coach James Cole is putting together a competitive adult swim team that is open to anyone age 18 and older. Participants don’t have to be competitive swimmers, or even have any competitive swimming experience. He’s holding a meeting at 7 p.m. Tuesday, Aug. 1, at the YMCA, 1601 S. Water St. (U.S. 281) in Burnet. The team is open to YMCA members and non-members. Staff photo by Daniel Clifton

Masters Swim Program at Burnet YMCA for Ages 18 to 100, All Levels

BURNET — Just because your not a teenager anymore doesn’t mean you still can’t experience the joy of sports competition. In fact, you’re competitive urge might even burn a little stronger in your adult years.

That’s just what swim coach James W. Cole is looking for as he and YMCA of the Highland Lakes at Galloway-Hammond develop a masters swim program.

Don’t let the name “masters” intimidate you; it’s for anyone age 18 and older, even if you’ve touched the centenarian mark.

“We haven’t lost our desire to compete,” Cole said. “Nothing has changed since we’ve become adults; there is that competitive element that we all still have.”

He emphasized that you don’t need any competitive swim experience to participate.

The program kicks off with an informational meeting at 7 p.m. Tuesday, Aug. 1, at the YMCA, 1601 S. Water St. (U.S. 281) in Burnet. Cole will go over details of the team and program. It’s open to both YMCA members and non-members. He added that he’s creating an adult program that fits the needs of the participants.

Cole draws on a lifetime of swimming experience, but he wasn’t a child prodigy. He didn’t learn to swim until he dipped his toes into his teen years.

“I was 12 and learned to swim in the Boy Scouts,” Cole said. “By the time I was 14, I had beat a national record. I had a natural acumen and certainly had the desire to swim and compete, but anyone can get better at it.”

He’s not looking to build Olympians through the masters program; rather, he wants to give swimmers of all ages and experiences a place to compete or simply enjoy the camaraderie of a team-like atmosphere.

Cole and YMCA program coordinator Erica Melton pointed out that swimming is a lifetime sport with many benefits.

“It’s something you can compete at your entire life, so if you’re 60, you’re competing against other 60-year-olds,” Cole said. “There’s not a lot of other sports you can really do that at. I mean, I’ll never run the bases … or compete in sports like basketball anymore.

“But I can swim and compete at it until I’m much older,” he added.

“Your mental and emotional health are just as important,” she noted. “Coming for the competition, you’ll get a lot of support that goes with it from the other swimmers. You really get the social aspect as well, and that’s just as important for a lot of people.”

Cole agreed, pointing out that you’re more likely to enjoy swimming — or any individual sport — if you’re with a group. With other people involved, you’re likely to stick with it as well as push yourself a bit more.

He leaned in just a bit closer before revealing one more thing.

“This is something people might not know, one of swimming’s secrets: … It’s a boring activity if you do it alone,” Cole said of swimming. “Competition and the social aspect, well, they make it so much better and fun. You’ll enjoy it a heck of a lot more with other people.”

You shouldn’t let the talk of “competition” scare you off if you aren’t exactly blazing down the pool. Cole sets up programs for people of all abilities, aspirations, and goals. Even if you’re looking to just up your fitness level, the masters program is a great place to start.

Jennifer Kenson, the YMCA of the Highland Lakes at Galloway-Hammond director of operations, pointed out that swimming has helped many people go from what would seem like insurmountable physical problems to much higher levels of physical fitness. Swimming allows people to be physically active without putting stress on their joints and tissues. Getting in the pool is also great for people rehabbing after an injury.

“If it wasn’t for swimming, doctors told me I wouldn’t walk again,” said Kenson, referring to a head-on collision that severely injured her.

Cole isn’t just set on creating a masters swim team. He is also working on developing a program that provides people opportunities to pursue their swim goals, wherever they take them. He’s even reaching out to the triathlon crowd to help them with their swimming.

“What I’d like to do is help triathletes because, notoriously, swimming is the worst thing they do,” he said.

Open-water swimming isn’t just reserved to triathletes. It’s another part of swimming that anyone can benefit from and enjoy. There’s even a number of competitive options for the open water master.

“Oh, there are lots of swim meets and competitions,” Cole said. “Most people don’t have any idea how many because they’re not in the sport, but you can find them all over.”

The first step is to give Cole and the YMCA staff a few minutes on Aug. 1. He’ll go over the masters program and swim team and answer questions. There is no obligation.