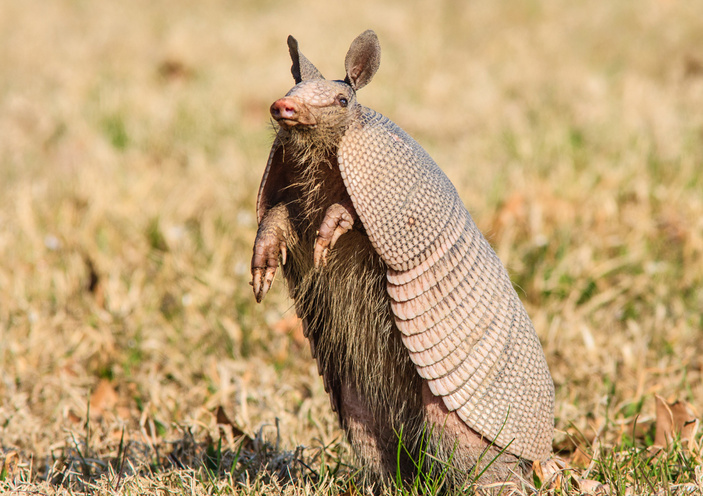 An armadillo stands on its hind legs to look for danger. The largest population of nine-banded armadillos lives in Texas, where the armored animal was named the official state small mammal in 1995. It shares the mammal title with the official state large mammal, the longhorn. iStock image

Loners, these nocturnal, shelled creatures don’t live or travel in groups except during mating season, when males and females pair up and sometimes even share a burrow. Females always give birth to four identical babies called pups, which are born in the spring fully formed with soft shells and open eyes. They begin walking a few hours after birth. While nursing, the young remain with the mother for several months.

Armadillos typically make their homes near a source of water. Because of its ability to hold its breath for up to six minutes and fill its intestines with water, an armadillo and its heavy shell can cross narrow streams or ditches by walking underwater along the bottom. Crossing larger bodies of water requires the armadillo to inflate its intestines with air so it can swim across. It takes the animal several hours to release all of the air after its swim.

An acute sense of smell helps them locate food, even if it's hiding 8 inches underground. Armadillos dig up the earth with large, powerful claws and capture their prey with long, sticky tongues. They eat bugs, worms, and slugs that prefer soft ground. Soil texture is directly related to the number of armadillos in an area. The softer the soil, the more armadillos. While foraging, the armadillo makes a grunting noise.

Their sense of smell makes up for their poor eyesight. Originally thought to be toothless, they have four square, peg-like teeth that can’t be seen, even when their mouths are fully open. When not after food, they sleep in burrows, which, in the Highland Lakes, could be natural caves, cracks, and crevices of limestone outcroppings or dug out of the soil.

Timid creatures, armadillos wear their primary defense mechanism on their backs, which, like a turtle, is connected to their skin. The top side of the armadillo, including its head, is covered with a bony protective shell (or carapace) made up of bone covered in scales (or scutes).

Scutes on the bands are triangular, while scutes on the rest of the body are hexagonal. The long tail is covered completely with rings of scutes. The underside of the armadillo is unprotected.

In addition to the shell, armadillos have a few other survival skills, which include holding very still and hoping not to be noticed, jumping 3-4 feet straight up to startle predators, and making a quick escape to hide in prickly brush.

An armadillo’s natural predators include coyotes, bobcats, foxes, and raccoons. Hawks, owls, and feral pigs prey on young armadillos. The increase in feral pigs, droughts, and commercial harvesting to make trinkets and jewelry from the shells has led to a decline in the armadillo population, although cars are actually the leading cause of death.