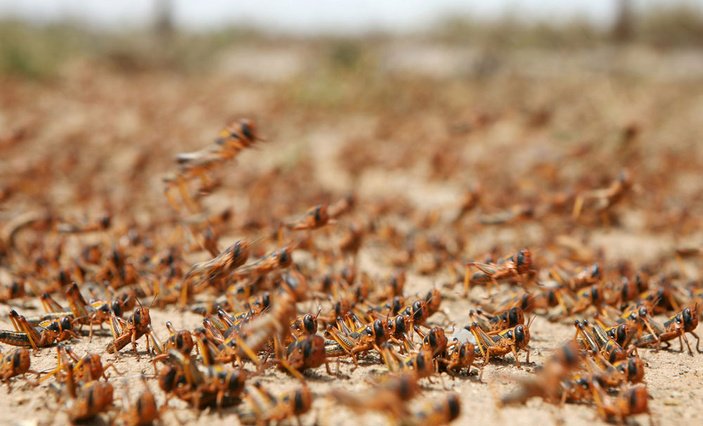 In swarm mode, these grasshoppers are locusts. What other noisy bugs live in Central Texas? Keep reading.

Did you know the insect that leaves behind a hard brown shell often found on trees is a cicada, not a locust? Or, that all locusts are grasshoppers but only some grasshoppers are locusts? It’s true. While the names of these noisy bugs are often used interchangeably, they are different insects — except when they’re not — with different sounds.

Let’s start with the oddest basic bug mentioned here: the locust. A locust is an over-excited grasshopper. As a locust, the insect tends to swarm. In dense, mobile clouds, locusts can be a serious threat to a region’s food source. Alone, they are short-horned grasshoppers perfectly happy to maintain their solitary existence as long as they have something to eat.

In swarm mode, they are entirely different creatures. Both their behavior and bodies change. In fact, until the 1920s, grasshoppers and locusts were assumed to be two different species. A 2010 study noted that the change is triggered by brain chemistry when the bugs begin to congregate in search of food.

However, not all grasshoppers turn into monstrous storms in times of food shortages. According to the 2010 study, only about a dozen of the 12,000 grasshopper species mutate into locusts when gathered together. While grasshoppers also are known to swarm without turning into locusts, that phenomenon is a relatively recent occurrence in the bug’s evolution. 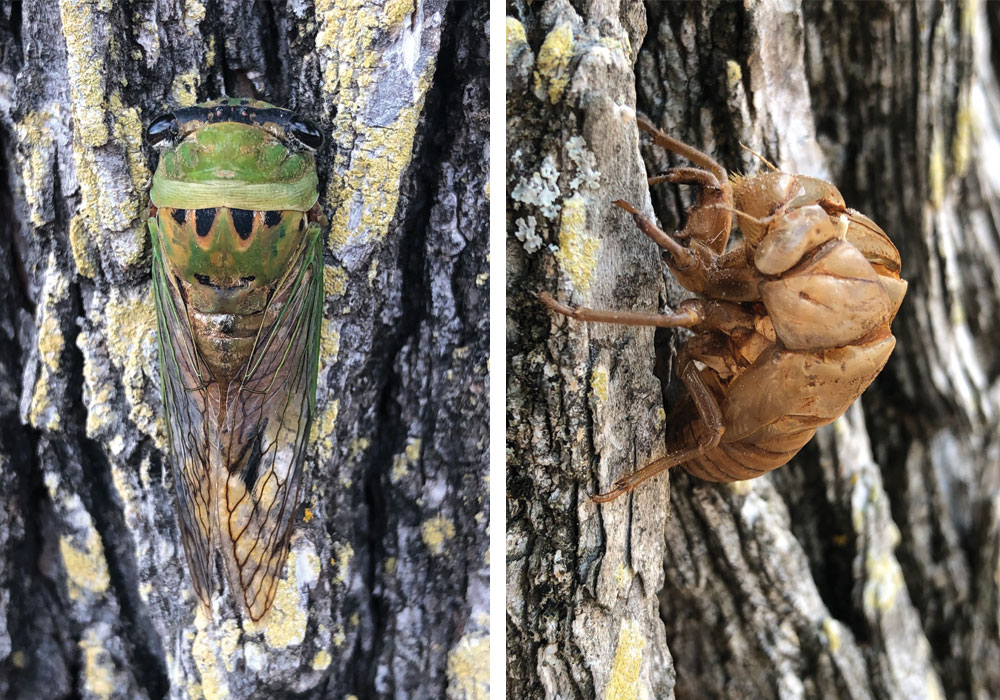 A cicada and a brown shell after molting. Staff photos by Jennifer Greenwell

Cicadas are related to neither locusts nor grasshoppers. They are cousins of crickets, though they appear to act more like locusts. Rather than swarming, however, cicadas produce a swarming effect as they appear above ground at the same time. Unlike locusts, cicadas don’t destroy crops. They chomp on the bark.

One thing locusts, grasshoppers, and cicadas all have in common is the sound they make. The easiest way to tell the difference is by noting when you hear it.

A bug chorus tuneup on a warm summer day means you are hearing cicadas and grasshoppers. A twilight symphony is most often performed by crickets. 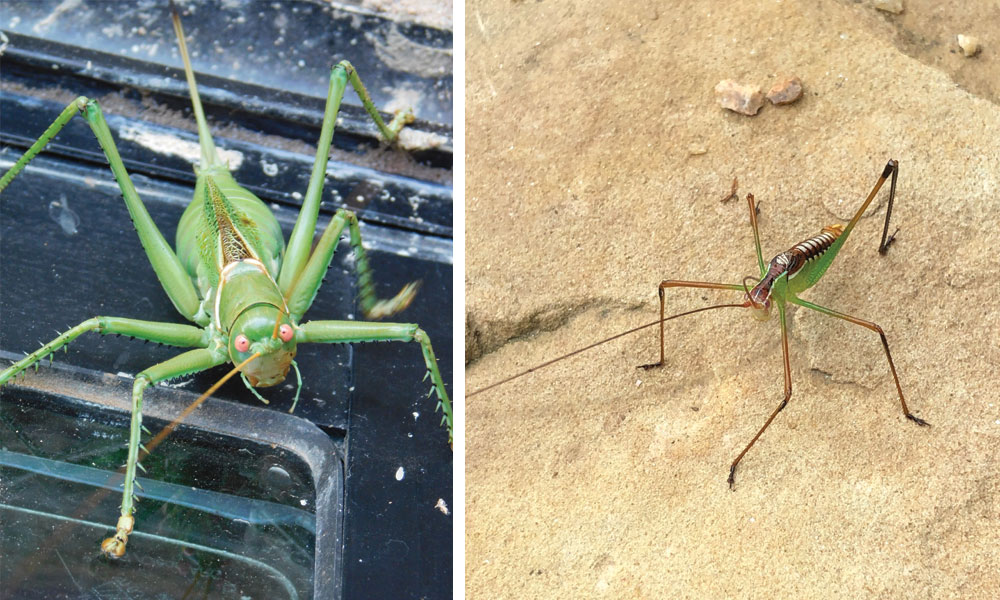 A red-eyed devil katydid and a nymph (juvenile). Staff photos by Jennifer Greenwell

A nighttime tune that sounds something like “kay-tee-did, kay-tee-didn’t” is the song of the katydid. Just to make things a bit more confusing, katydids are locust-like but are actually long-horned grasshoppers, also known as bush crickets. Like, cicadas, they are from the cricket family.

All of these tiny musicians use different instruments to create the sounds of a Central Texas summer.

Cicadas have a special sound-producing organ called a tymbal (think of the bend in a bendy straw), which is manipulated by surrounding muscles to produce rapid clicks that begin to sound like a buzz.

Field crickets, grasshoppers, locusts, and katydids all stridulate, or rub two body parts together, to produce a harsh sound. The body parts used differ for some.

Crickets rub pegs (tegmina) on one forewing against the flat structure (file) of the other forewing to produce a chirp.

Katydids produce a much different sound the same way. True katydids make the sound for which they are known, while false katydids (which are katydids that don’t make the “katy-did, katy-didn’t sound) produce rattles, tic-tic-tics, and vzzt sounds. Male katydids are often heard in chorus competing for the ladies.

Grasshoppers and locusts stridulate by rubbing the pegs of a hind leg against the edge of a forewing, producing a rattling sound.

The insects are also distinguished by how they travel.

Cicadas walk or fly; they do not jump. Their three pairs of legs are the same length. Crickets walk or jump. Although they have wings, most are not able to fly. Katydids walk and jump, while some fly. Grasshoppers walk, jump, and fly, though only short distances.

They hang out in different places and eat different things.

Cicadas live underground most of their lives, sucking liquid from roots. They do not have chewing mouth parts. Once they reach adulthood, they emerge and can be found in the tops of trees. If you find a brown shell on a tree trunk, you know a cicada has been there. 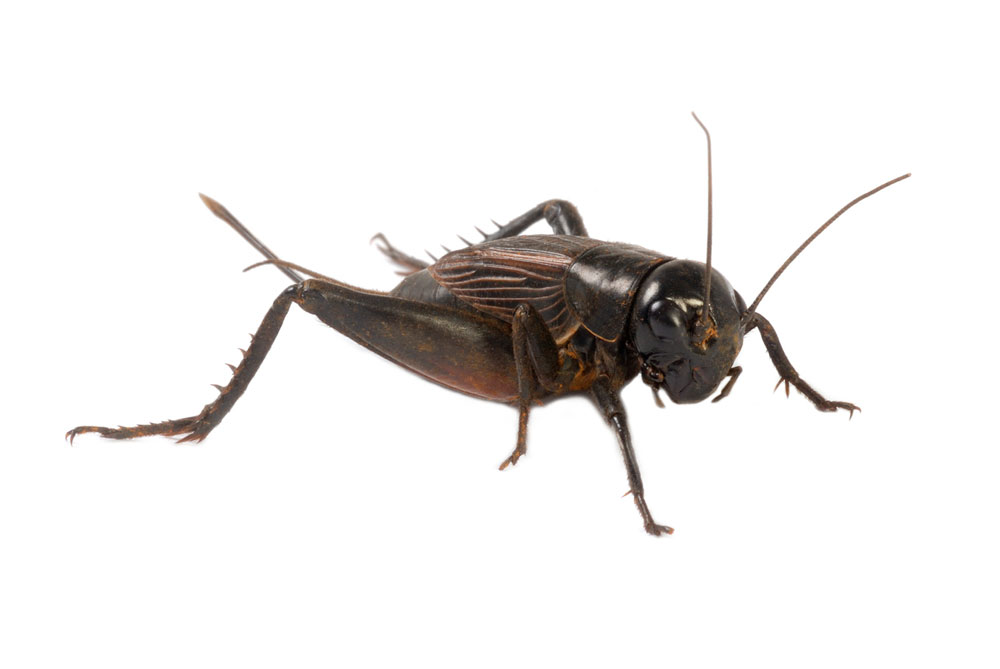 Field crickets can be found in a variety of places from fields and lawns to damp basements or around plumbing. They are scavengers that primarily eat plants but will dine on smaller insects and even fabric if available. Katydids and grasshoppers live in trees and brush and prefer to eat plants.

Cicadas can live from 2 to 17 years. Annual cicadas emerge yearly and have shorter lives, while periodicals emerge once a decade and can live up to 17 years. Crickets have the shortest lifespan, around 90 days. Katydids and grasshoppers live for about one year.