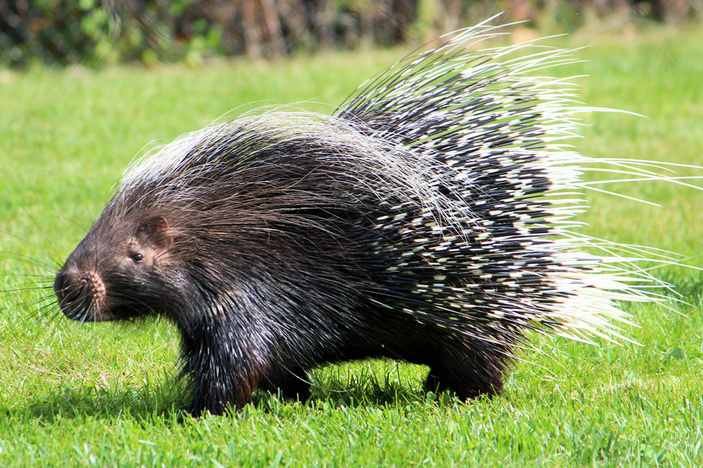 A social media post about a mysterious mammal crossing a Highland Lakes lawn had people wondering: What the heck is that? Guesses included nutria, badger, and chupacabra, a mythical monster of the Americas. Actually, it was a porcupine in the process of shedding its undercoat.

An animal like Gypsy, for example, a Lacy-German shorthair mix owned by Central Texas musician and Realtor Pauline Reese. A hunting dog on both sides of her family, Gypsy recently went head to butt with an Erethizon dorsatum and ended up with about 60 quills in her mouth and nose. An emergency trip to the veterinarian took care of the problem, although embedded barbs rose to the surface for about six weeks after.

“This was the fourth time she attacked a porcupine,” Reese said. “The first two times, she only had maybe 10 quills in her face.”

With just a few quills, Reese was able to clip each one to about a half-inch, which she says lets out the air pressure in the hollow quills and, in turn, releases the barb on the end, making it easier to pull out. Gypsy’s emergency room attack came during mating season for the North American porcupine, which is in late summer and early fall.

“It’s really important that people know that because they need to protect their dogs,” Reese said. “Walk them on a leash and keep them indoors during porcupine mating season.”

The North American porcupine is the second-largest rodent in the country — the beaver being the largest. It used to be found in Texas only along its western border. Over the past century, the state’s porcupine population has increased and spread to all but East Texas — so far.

Solitary wanderers, porcupines have adapted to a variety of habitats and can be found in forests, rocky and brushy areas, and even near rivers and streams. Preferred den locations vary as well and can include caves, rocky crevices, hollow logs, and exposed tree-root systems. Nests have even been found in trees.

Porcupines don’t hibernate in the winter. The nocturnal animals spend much of the fall and winter at night in trees dining on pine needles, mistletoe, and inner tree bark. They have been known to forage in groups during the winter and can damage or even destroy a tree.

In the spring and summer months, they feast on ground vegetation such as roots, seeds, grass, and buds. Like other herbivores, porcupines are drawn to salt and will seek it out even if it comes in the form of a once sweaty ax handle or horse saddle. Bones and antlers provide the critter with necessary minerals.

An adult porcupine weighs upward of 20 pounds. Its heavy, round body combined with strong, short legs give the animal a squatty appearance. Its feet make it an excellent climber. The pads are bare and there are four long claws and opposable thumbs in the front and five long claws, no thumbs, in the back.

The aroma of a porcupine, which only another porcupine could love, has been compared to urine, human body odor, and stinky cheese.

When a male porcupine has his sights set on the opposite sex, the antics begin. He does a little dance, sprays a little urine, in hopes to get down tonight. The female porcupine’s gestation period lasts about seven months, which is considered long for rodents. The sow gives birth to one porcupette, which looks exactly like a tiny version of an adult. Its quills harden within hours of birth. The mother nurses the baby and introduces it to the porcupine life for three to four months before it is self-sufficient.

The typical prickly pig has about 30,000 yellow-white quills in various stages of growth at all times. Much like human hair, the quills are constantly growing and shedding and are made of keratin. Unlike human hair, porcupine quills are hard and hollow, like straws, with black, barbed tips. In addition to quills, porcupines have bristly, light-colored guard hairs and a dense layer of short yellow-brown to black under-fur. As the temperature heats up, the under-fur sheds, sometimes in clumps, giving it a very untidy, even mangy appearance, much like the mystery mammal that received so many social media comments.

Typically docile, there is no way the waddling wanderer would stand a chance against predators if it weren’t for its built-in weaponry. When a porcupine senses trouble, it’s knives out!

An agitated porcupine will charge predators backside first and tail swishing. The backside and tail contain the bulk of its quills, which fall out at the slightest touch. The oversized rodent is not able to throw its quills as many believe. Its face and belly are quill-less, which gives experienced predators the necessary niche in the armor for dinner. Coyotes, foxes, bobcats, and great horned owls bite or peck at a porcupine’s face continuously and then flip it over to expose the unprotected belly. Other predators include humans, usually in automobiles.

As for domestic dogs, unlike coyotes and chupacabras, they should steer clear.

“Gypsy was covered with quills,” Reese said of her dog. Longtime Marble Falls residents, the Reese family recently moved to Dripping Springs. “She’s a family-oriented dog and really sweet. She thinks she always has to protect us.”