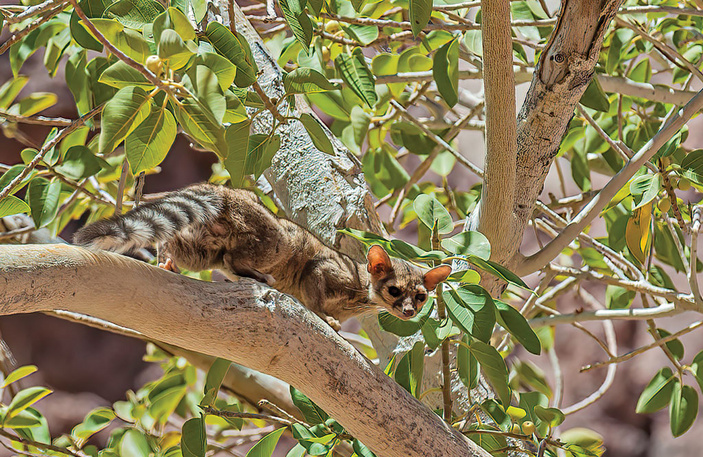 Ringtails mate in the spring, and females give birth to up to four kits. Mothers do most of the raising, but the dads have been known to stick around a short time to play with the babies. It would have to be a short time, however, as kits move out and are on their own at around 4 months old.

Those who have caught a glimpse of this native Texan in its natural habitat should consider themselves lucky. With a face like a fox, a body like a cat, a tail like a raccoon, and the moves of a wildly energetic squirrel, the ringtail is as elusive as it is adorable. Although ringtails are native to the Highland Lakes, sightings are few and those who have seen one are often left guessing, "What the heck was that?"

Sometimes referred to as a ringtail cat, Bassariscus astutus is neither in the feline nor the lemur family, despite its similarities to both species. It belongs to the raccoon family and, like its cousin, is nocturnal. Its Latin name means "cunning little fox." Scientists often refer to ringtails as living fossils because they are very similar to their ancestors from the Neogene period, an interval between 23 million and 2.6 million years ago.

The ringtail is slightly smaller than a house cat with a nose-to-tail length of about 18 inches. At least half of its length is tail. It is a skilled night stalker with large cupped ears that can rotate independently and big, round eyes ringed with white.

The tiny creature is also a remarkable climber thanks to its semi-retractable claws and back feet that can rotate 180 degrees. It has a superhero-like leaping ability and can ricochet off of vertical surfaces with ease. A ringtail can run down a tree head first, scale vertical walls, and climb crevices by chimney stemming — placing its back against one side and all four feet on the other.

Ringtails are rarely seen. They den in caves, crevices, hollow trees, brush piles, and even the vacated dens of other animals. Also, these solitary creatures do not stick around any one place for more than a few days, most often making their homes in rocky landscapes near water.

They mark their territories, which range from 50-100 acres, with scat. Males establish larger territories, often overlapping that of females.

Ringtails spend each night hunting for food. As morning approaches, they den where it's most convenient. They have been known to briefly take up residence in unoccupied deer stands, sheds, attics, or other vacant manmade structures.

Predators include coyotes, bobcats, great-horned owls, mountain lions, humans, and automobiles. Ringtails in the wild live about seven to 10 years.

Omnivorous eaters with superb hunting skills, they are known to devour rodents, insects, frogs, leaves, berries, and birds. Following a meal, ringtails sit on their hindquarters and groom, much like a cat, licking a forepaw and wiping the ears, face, and snout.

Each spring, female ringtails beckon suitors with calls. While the mating season lasts two months — March and April — females are in heat only 24-36 hours. They give birth to up to four kits a mere 50 or so days after fertilization.

At birth, kits have short, light-colored fuzz, no teeth, and cannot see or hear. Females are the primary caregivers for the young, but the males have been known to hang around and play with the offspring. At about four months of age, the young look like the adults and strike out on their own.

Although largely unknown as a native to Highland Lakes wildlife, ringtails are gaining recognization in Central Texas through Ringo, the mascot of the Texas Stars hockey team. Ringo is currently recognized as the Best Mascot in the American Hockey League. (He also took those honors in 2018 and 2019.) The Texas Stars hockey team is at home in the H-E-B Center at Cedar Park. Wild ringtails are at home just about anywhere in Central Texas.

Six tips for staying safe on the trails from the TPWD

5 reasons to stay on Lake Buchanan