Snakes of the Highland Lakes 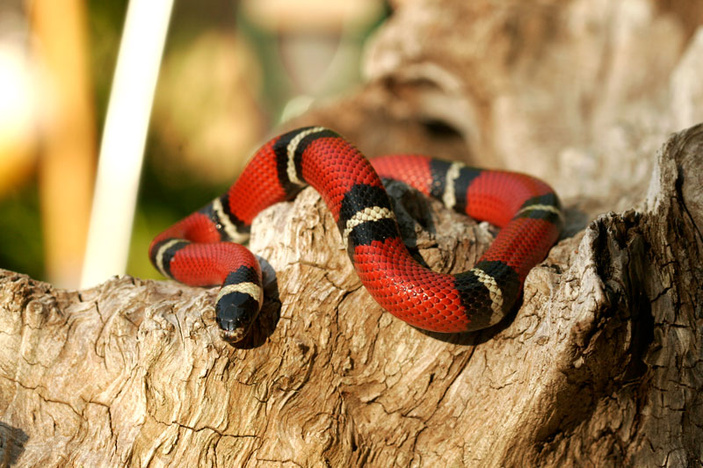 The Mexican milk snake (lampropeltis annulata) is a nonvenomous reptile often mistaken for the coral snake. The milk snake has red, black, and yellow bands that do not go completely around the body — the underbelly is a uniform color. The red bands are always bordered by black. ‘Red on black, friend of Jack.’ Look for more snakes found in the Hill Country below.

Snakes of the Highland Lakes

Home to over 115 species and subspecies of snakes, Texas harbors more of these reptiles than any other state in the nation. The good news is that most of these snakes — roughly 85 percent — are nonvenomous. In fact, despite our fear of snakes, they actually do more good than harm and should be left alone to thrive in the environment, according to the experts.

Snakes help control pest populations by feeding on things such as slugs, insects, rats, and even other snakes. In fact, the bull snake is considered a farmer’s best friend as it preys on rodents that threaten crops and is a great organic method of pest control.

Snakes are rarely aggressive, even the venomous ones, said Jarrod Forthman, development director at Animal World and Snake Farm Zoo in New Braunfels. Forthman, who has more than 25 years’ experience working with snakes from around the world, said “snakes would much rather flee than fight.”

“The more aggressive snakes may stand their ground, giving anyone or anything approaching a chance to keep their distance,” he said, adding that most of the stories told of snakes chasing people are more often snakes attempting to get away.

“Many snakes have poor eyesight and often attempt to slither to safety in the direction of whatever it is they are trying to get away from,” he said.

He recommends respecting the snake’s space to keep peace between the species.

Inks Lake State Park interpreter Lindsay Pannell agrees that snakes are given a bad name due to popular myths.

“Snakes are often made out to be aggressive,” she said. “They are not unless provoked.”

Snakes generally are shy, she continued. When startled, snakes become defensive. Pannell recommends staying on marked trails when hiking, which is a rule in all Texas state parks.

Snakes are often mistaken as a threat and killed, especially water snakes like the diamondback water snake.

“They are nonvenomous but often attacked because they look like water moccasins to the unfamiliar observer,” Pannell said. “A good rule of thumb: Water moccasins are rarely in high-traffic areas, while diamondback water snakes are often found there. Diamondback water snakes are exceptional hunters and vital to the natural ecosystem, as are all snakes.”

In other words, don’t kill every snake you see.

Forthman offered this advice for those who suddenly find themselves in the vicinity of a snake: In all instances, keep your distance, leave it alone, and move away.

Remember: While out and about enjoying the spring weather, wildflowers, and wildlife, it is extremely important to pay careful attention to where you s-s-s-step. 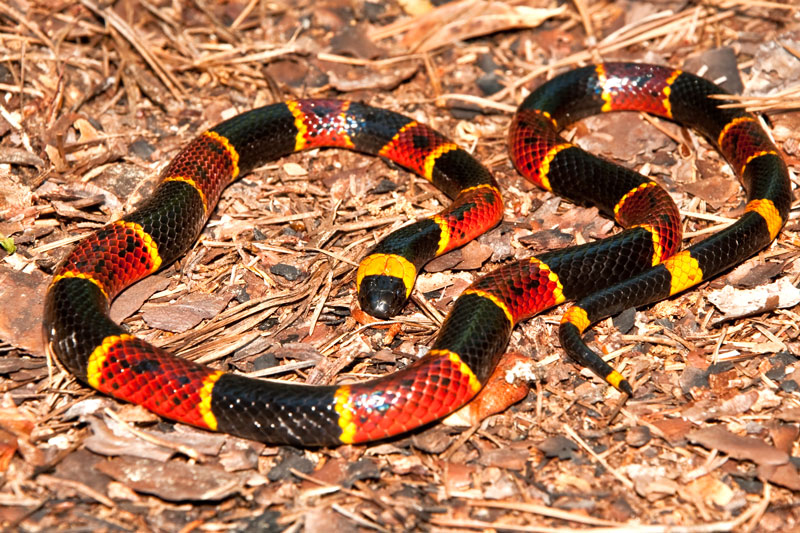 A highly venomous snake with broad bands of black and red each bordered by more narrow, yellow rings that completely encircle the body. It has the second-strongest venom of any snake. ‘Red on yellow, kill a fellow.’ 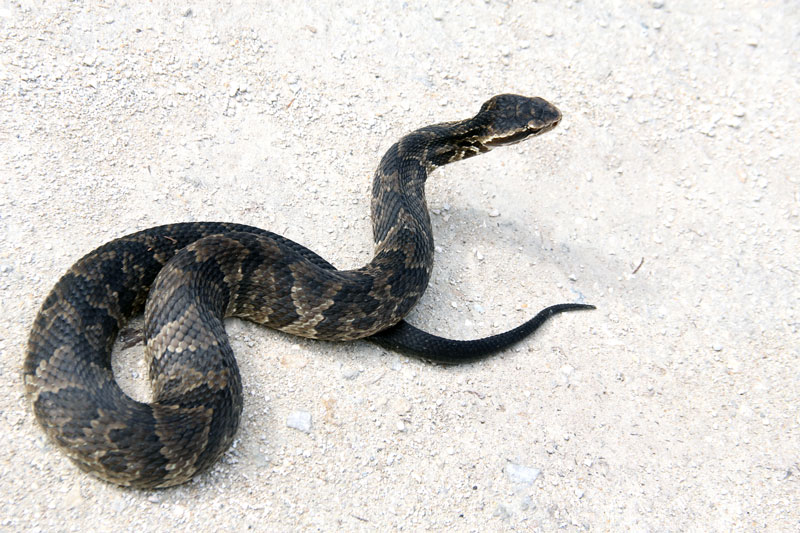 The only venomous water snake in North America, it has a thick body that can be dark brown, olive brown, or black with wide, darker bands. It displays an open cottony-white mouth when threatened. 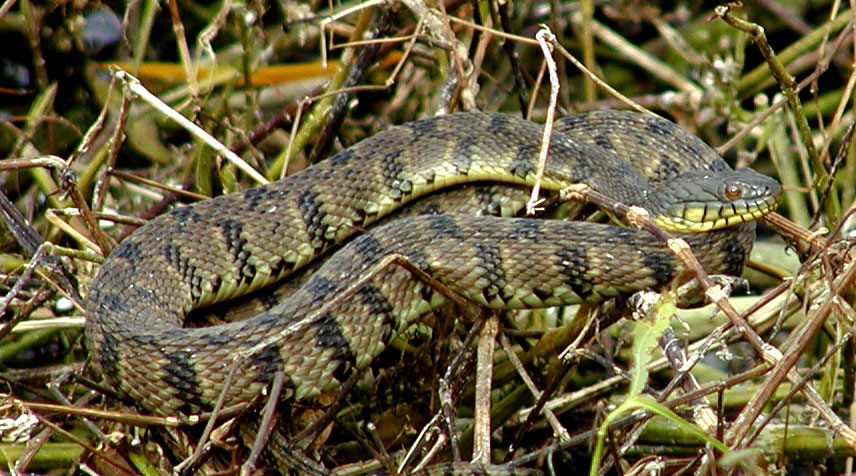 A nonvenomous water snake often mistaken for the cottonmouth, it can be brown, gray, olive green, or reddish with dark splotches or bands. It is more slender and has a rounder head than the cottonmouth. 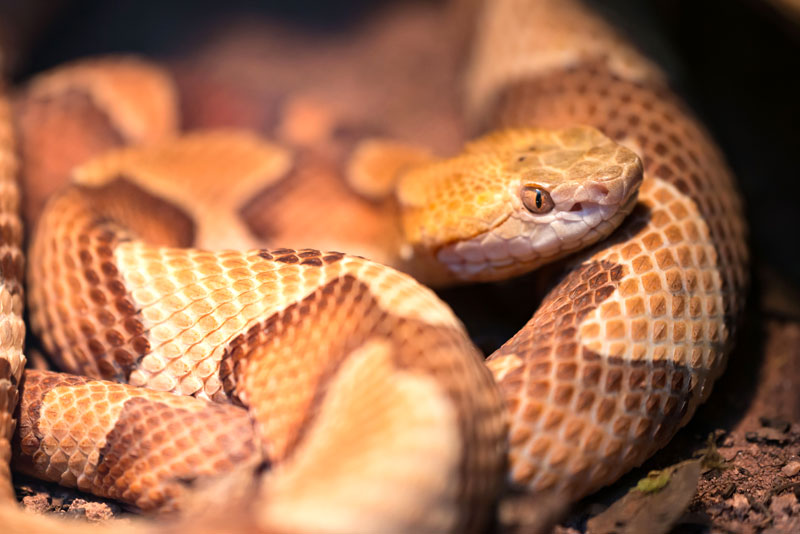 A venomous snake with a copper-colored head and distinctive hourglass-shaped bands found along streams and rivers and in overgrown vacant lots. Babies are born live. It gives no warning before striking; however, its venom is not very potent. 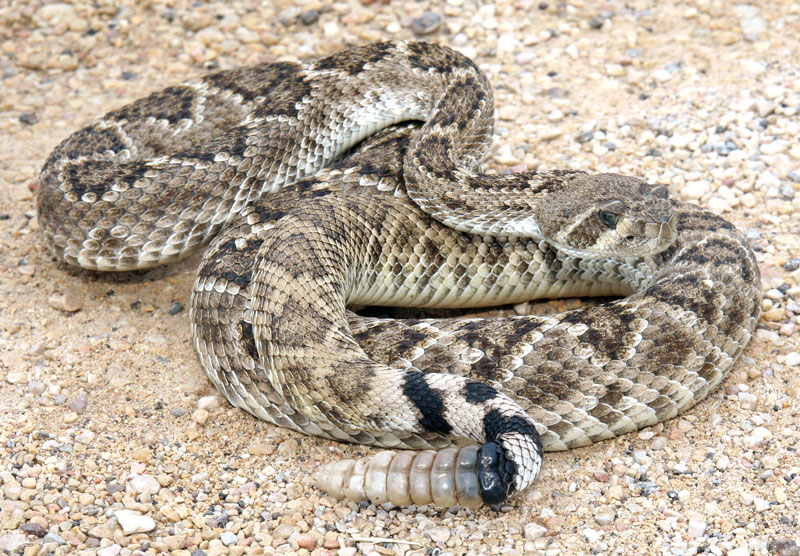 The most common venomous snake in Texas. It has brown, diamond-shaped markings down the middle of its back and rattles on its tail. Each time this snake sheds its skin, it adds another segment to the rattle. 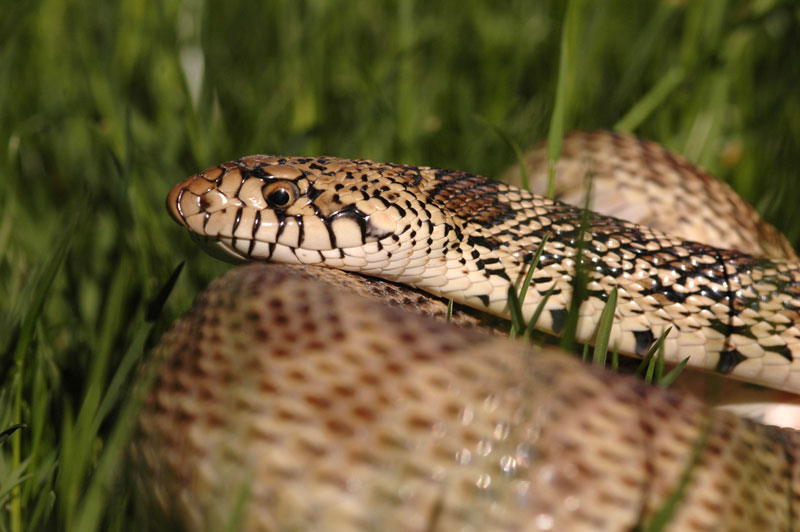 A heavy-bodied nonvenomous constrictor, which can be beige/light brown with dark brown/black splotches and a yellow belly with black spots. Nicknamed ‘Farmer’s Best Friend,’ it dines on small rodents. Bullsnakes are active during the day and often seen basking on roadways. 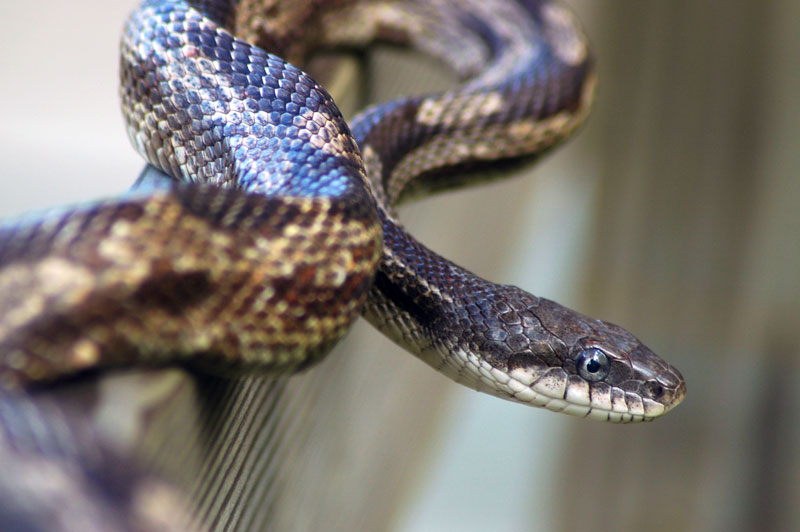 A nonvenomous snake found in a wide variety of habitats. In the Texas Hill Country, it usually has a yellow/tan upper body with brown/olive green blotches. It is an excellent climber. 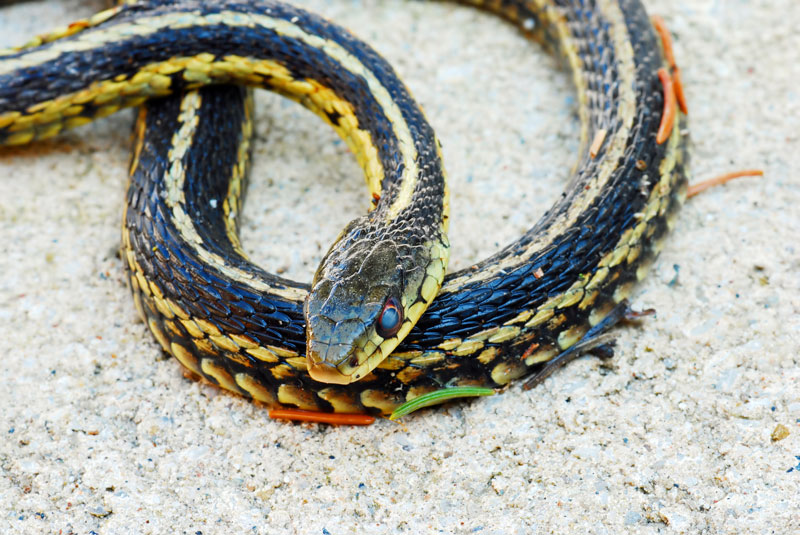 One of the most common nonvenomous snakes in North America. Most have three stripes running lengthwise on their bodies and are relatively small. When threatened, it might produce a bad-smelling musk. 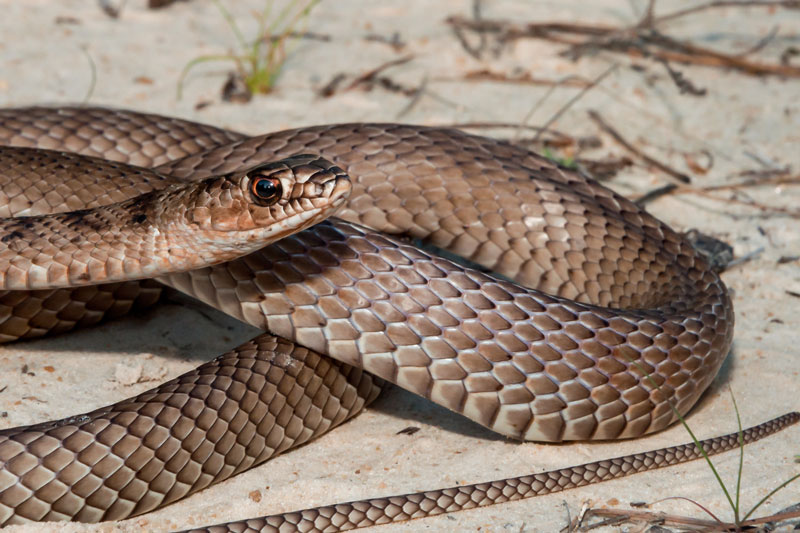 One of the larger snakes found in Texas. It comes in various colors — black, red, yellow-tan, and pink — and resembles a braided whip. It is nonvenomous but, when caught, might bite quickly and repeatedly.

• Snakes use their forked tongues to smell the air.
• They are ectothermic and must regulate their body temperature externally.
• Snakes shed their skin 3-6 times a year.
• Most snakes lay eggs, although some have live births.
• Snakes emerge from hibernation in Texas during late February or early March.
• Small snakes can live as long as 12 years. Large snakes can live to over 40 years.
• Eggs and young snakes are not cared for by either the male or female snake.