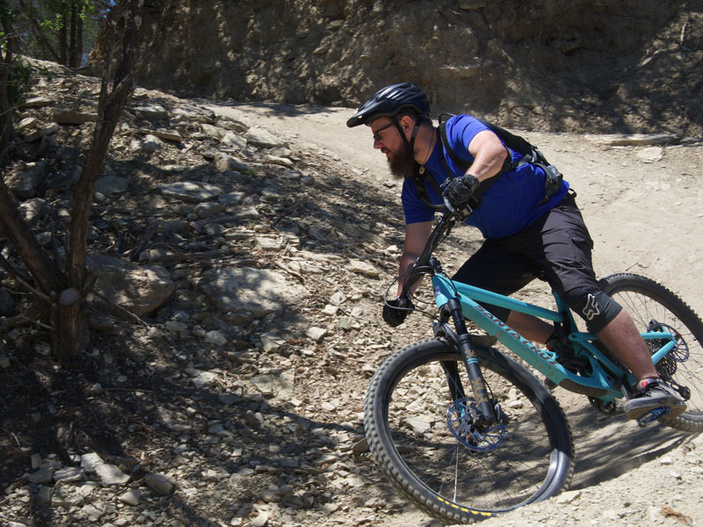 It’s all downhill from the top of Spider Mountain, but it’s a fun ride to the bottom. Spider Mountain Bike Park opened in February, but officials held a ribbon-cutting April 19. The chairlift-served park has trails fit for beginners to experts. Staff photo by Daniel Clifton

At first, it seemed out of place: a chairlift climbing its way up the side of a hill on the shores of Lake Buchanan in the Texas Hill Country. Even James Coleman, one of the minds behind the project, shook his head as he stood at the base of the lift.

“We thought about an idea like this and would people accept it,” he said.

Then, he looked at the line of 20 to 30 mountain bikers waiting to load their bikes onto the lift and head up Spider Mountain.

Coleman, the managing partner and CEO of Mountain Capital Partners, ushered in a new era for Texas mountain biking when Spider Mountain Bike Park opened up in February. He was at the park April 19 to cut the ribbon but also just enjoy the park along with several hundred people riding the trails. 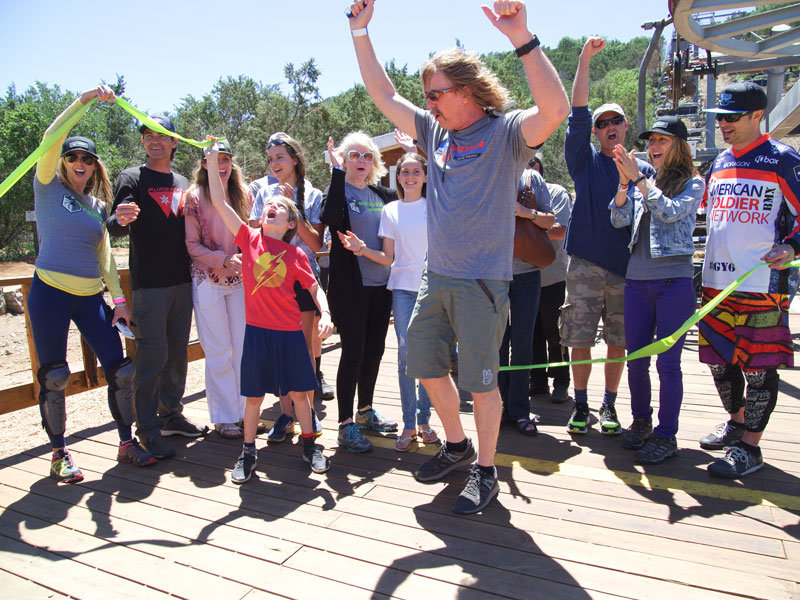 James Coleman, managing partner and CEO of Mountain Capital Partners, celebrated with family and friends after cutting the ribbon April 19 at one of MCP’s latest projects: Spider Mountain Bike Park on the shores of Lake Buchanan. The facility is the first chairlift-served mountain bike park in Texas and the first year-around, chairlift-served bike park in the country. Staff photo by Daniel Clifton

If Coleman or others had any doubts about how Spider Mountain Bike Park and its chairlift would be accepted, the line of cars, RVs, and trucks parked on the property and the number of folks waiting for the lift should have alleviated them.

Deseree Hernandez, director of operations for Spider Mountain, said the turnout that day was more than for a typical Friday but in line with a Saturday.

The concept of Spider Mountain is fairly simple: Riders take the chairlift to the top then pick from a number of downhill trails to ride back to the bottom. And repeat — over and over as many times as they like. Riders purchase a lift ticket, which gets them a day of lift access, or they can buy season or year passes. 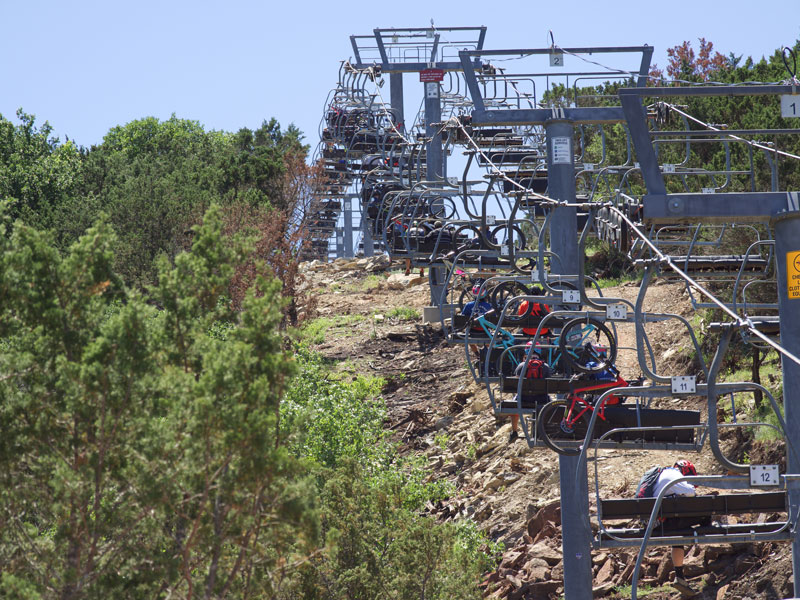 It took several trucks to haul in the chairlift from Taos, New Mexico, to Spider Mountain on the shores of Lake Buchanan. Staff photo by Daniel Clifton

Spider Mountain, located at 200 Greenwood Hills Trail, currently has four main trails with two others branching off from a couple of those. It’s just the start. Hernandez said they expect to get three more trails built this summer with additional ones coming in the future. While Spider Mountain offers 350 feet in elevation, it’s not about the drop.

“We don’t have the elevation you think of for parks like this, but we have an area that we can spread out in,” Hernandez said. “We have a lot more space to work with.”

In that space, they can carve out a lot more trails. The park's concept revolves around tiers of trails with six coming off the top, another 12 or so about midlevel, and 24 or more on the lower portion of the hill. By the time the trail buildout is complete, Spider Mountain riders could have more than 40 trails from which to choose.

While it might seem intimidating, Spider Mountain has trails fit for every level of rider.

“We’re definitely beginner-friendly,” Hernandez pointed out. “If you know how to ride a bike, you can ride our beginner’s trail.” 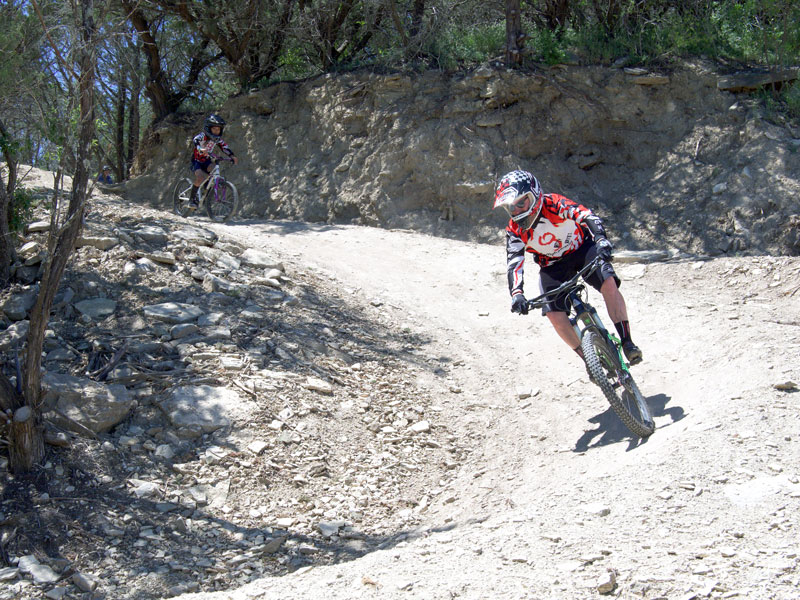 While it might sound intimidating, Spider Mountain Bike Park offers beginner- and intermediate-friendly trails. The park, located at 200 Greenwood Trails on Lake Buchanan, has seven trails (with more on the way) from beginner to expert. The staff can even help you get started in mountain biking. Staff photo by Daniel Clifton

The trails are marked by color to designate skill level, just like you would find at a ski resort. If you’re looking to up your mountain-biking skills, Spider Mountain has instructors who can help you.

The facility offers mountain bike and gear rentals as well.

“We can get you hooked up,” Hernandez said.

MCP owns and operates ski resorts in Colorado, Utah, New Mexico, and Arizona. Tossing in a bike park in the Highland Lakes on the surface seems like a duck out of water, but Coleman doesn’t mind challenging norms.

A product of Southern California before completing high school and college in Austin, Coleman first came up with the idea of going into the ski business his senior year in high school. Many parents might say, “That’s nice, hon,” and hope their teen moves on to something more "realistic,” but Coleman’s parents, James and Judy, encouraged him — as well as his two brothers — to set goals and go after them.

Even if it includes trucking pieces of a chairlift from Taos, New Mexico, to a hill next to Lake Buchanan in Central Texas. 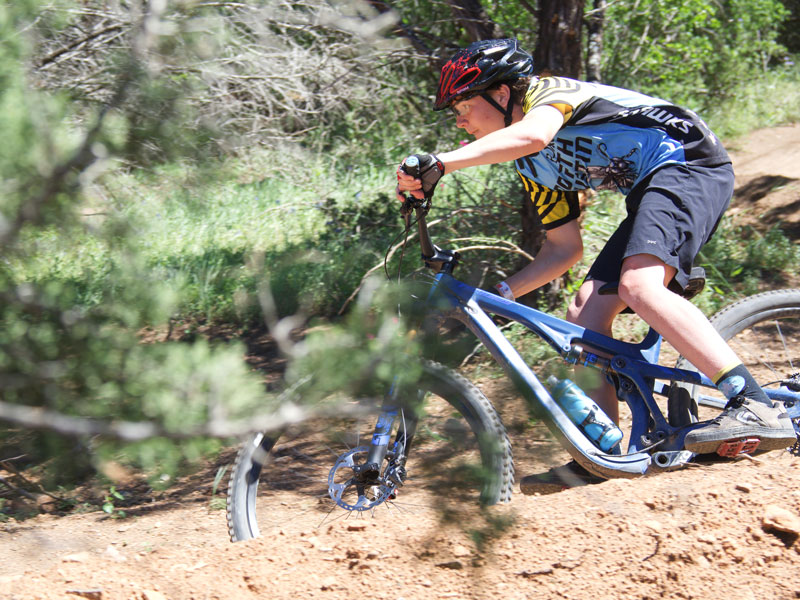 Spider Mountain Bike Park, located on the shores of Lake Buchanan, draws mountain bikers from near and far. The rider with the longest trip to Spider Mountain on April 19 hailed from Ireland. Staff photo by Daniel Clifton

Coleman got started in real estate development in Austin but eventually cast his eyes west. While some might see the ski industry has a questionable investment — with climate change, increased costs of the sport, and the graying of loyal customers — the oldest of the three Coleman boys has carved his name deeply into the southern Rocky Mountains ski scene.

In 2000, Coleman was the managing partner of a firm that purchased Sipapu Ski and Summer Resort near Taos, northern New Mexico’s older ski area. He helped turn it around to become one of the fastest-growing ski resorts in the Land of Enchantment.

Now, MCP owns and manages six ski resorts spread out across New Mexico, Arizona, Colorado, and Utah as well as a snowcat company.

The jump to Spider Mountain wasn’t really a leap as the Coleman family already owned the land. One of his brothers, John, floated the idea of building a downhill course on the property about four or five years ago. James tossed it around, studied it, bounced it off some other MCP folks, then plunged in.

Standing at the base of Spider Mountain, riders move into the chairlift line or grab something to eat at a food trailer (there’s also a barbecue trailer at the top of the hill). Some slip back to their vehicles or campsites to relax.

Bike companies come out and set up displays or hold demo days. Jason Coleman, who lives in the Marble Falls area and owns Coleman Team Realty, admitted some of the mountain bikes people will see at Spider Mountain Bike Park have a price tag of several thousand dollars.

But, he pointed out, someone with a low-cost mountain bike they bought at a big-box store can still come to Spider Mountain and have fun on one of the less aggressive trails.

“There’s a trail for everyone,” Jason said.

As James Coleman watched riders ride to the base on one of several trails and return to the chairlift line, he noted the smiles on so many faces.

“I love seeing those smiles,” he added. “That’s what we’re in the business of: putting smiles on faces.”