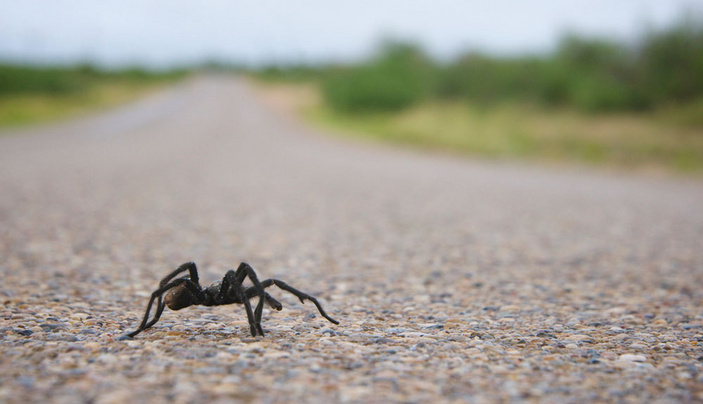 The Texas brown tarantula is a common sight in the Highland Lakes from May through July, often as it's crossing the road looking for love. Welcome to Texas tarantula migration season, which sometimes extends into October in Central Texas as mature males look for mates before they die.

Known by scientists as Aphonopelma hentzi, the Texas brown tarantula weighs 1-3 ounces and has a leg span of up to 6 inches. A member of the Theraphosidae family, tarantulas are the largest, heaviest, and longest-living spider in the world. They are easily identified by their thick, furry legs and body. 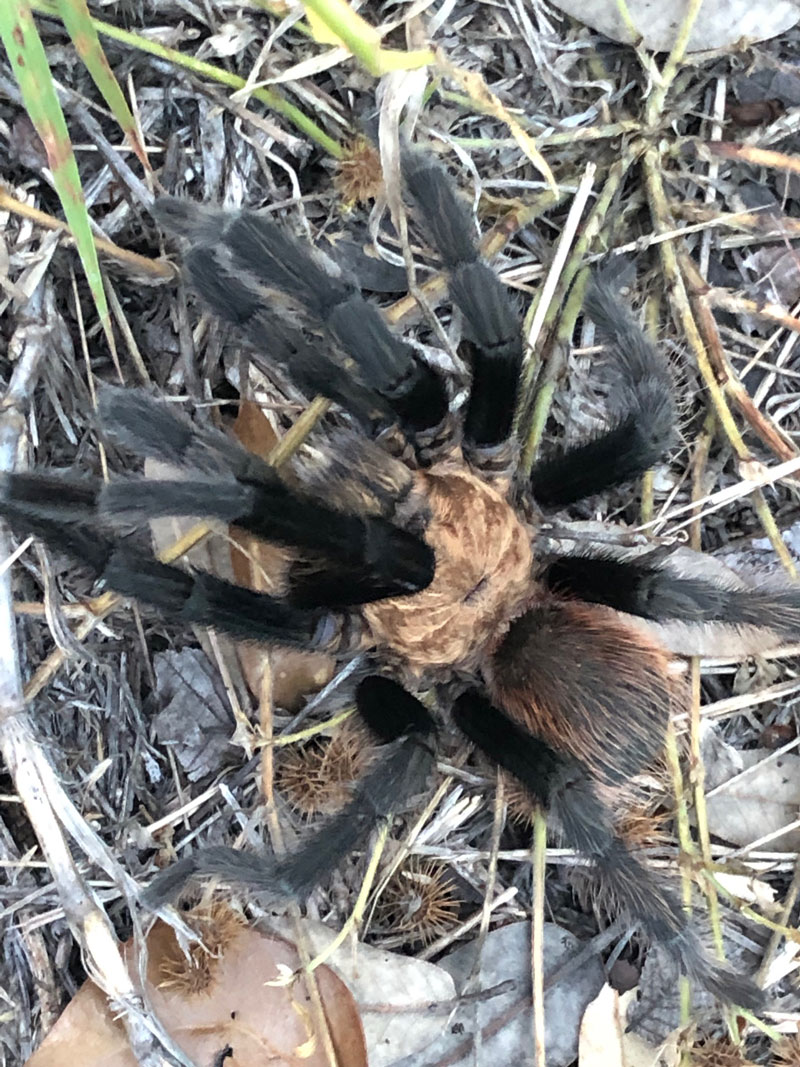 At first glance, they appear to have 10 legs, but two smaller appendages in the front are actually pedipalps, which work like arms to handle prey. Even though most tarantulas have eight eyes, vision is not their strongpoint. Scientist believe the spiders don’t see much more than light, dark, and movement. They track prey through vibrations.

The tiny hairs that cover a tarantula’s legs, called trichobothria, pick up vibrations from the approach of nearby prey. Urticating hairs on top of the abdomen serve as a defense. When threatened, the tarantula rubs these hairs with its hind legs, throwing them at the attacker. They cause irritation similar to that of stinging nettle. Tarantulas also have fangs, but they rarely bite — at least not people. The fangs are used to inject venom into prey. A tarantula bite is said to be similar to a bee sting and is not normally toxic to humans. The venom and enzymes liquify the prey, which the tarantula then consumes with its straw-like mouth.

Contrary to their frightening appearance, tarantulas are good neighbors. Gentle and shy, these furry friends eat pests. The menu for a Texas brown tarantula includes cockroaches, crickets, scorpions, June bugs and other beetles, and grasshoppers. Larger tarantulas might dine on mice, lizards, snakes, small birds — and sometimes each other.

Tarantulas are not often seen because they live in burrows under logs, rocks, and loose tree bark. They prefer to stay home and dine on prey that ventures across the lines of silk spun near the burrow's entrance. They only venture out to forage when necessary. During mating season, males can travel up to a mile from their burrows to look for females.

A male reaches maturity after its final molt, when it develops reproductive organs. Instinct kicks in, and it sets out in search of a willing mate. Natural predators and cars often end its journey before the mission is accomplished.

Not normally social creatures, tarantulas travel alone, creating a steady trickle of spiders as opposed to a bachelor parade. In the Highland Lakes, signs of migration include seeing a greater number of tarantulas than usual crossing roadways over the course of the week.

A male on the move locates a female by following her chemical scent. Once in the neighborhood, the male will tap or drum on the silk threads near her burrow with his pedipalps. If interested, the female will come out or even tap back to let him know to come in. If uninterested, she will not engage and he could end up as her next meal. Males do not live long after mating as their bodies are not equipped for longevity. Males are usually smaller and thinner than females.

Tarantulas are completely harmless and, in fact, beneficial, so it is best to let the creatures go about their business when spotted. Given a choice between a tarantula and a scorpion or roach, the tarantula wins every time!

Shooting ranges in the Highland Lakes