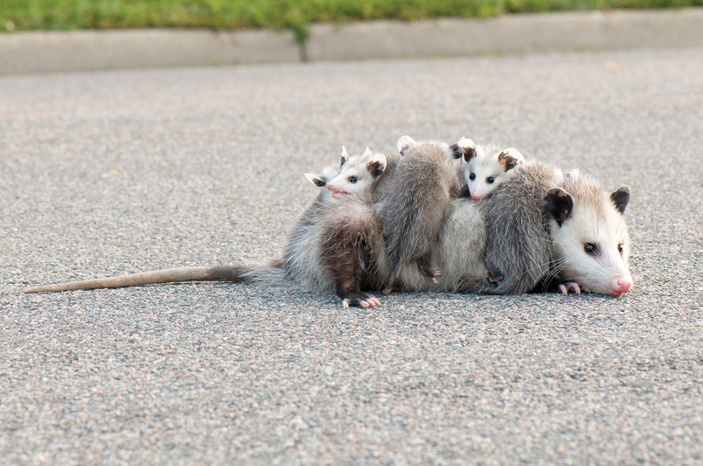 The white-faced, gray marsupials with almost human-like hands and prehensile tails are Virginia North American opossums, so named by English colonist John Smith of the Jamestown colony in 1610. It is the only marsupial native to the Highland Lakes and North America. It is not, despite popular belief, a possum, which is only found in Australia. In fact, the Australian possum, also a marsupial, was named after the North American variety, whose moniker comes from the Algonquian word apasum, meaning white animal or white face. Possums without the "o" do not have white faces.

And, no, the “o” is not silent. The correct pronunciation is uh-pa-sum, although not many put the “uh” in front anymore.

Opossums have been around for millions of years, evolving from the age of the dinosaur. They are sometimes referred to as living fossils because they have retained many of the same features from the earliest-known marsupials. Their large, strong jaws and teeth as well as the female’s marsupial pouch are a few of their more primitive features.

Male opossums are known as jacks, the females jills, and the young joeys. Jills give birth only 12 or so days after fertilization. The young are only half-baked at this point and far from being fully developed. The newborn, hairless, and blind joeys have only front legs and a mouth and are about the size of a honeybee. They crawl directly into the marsupium, or pouch, and remain firmly attached to the mother’s milk supply for eight more weeks of development. Even after that, they remain in the pouch for another month or more. The young also ride on the mother’s back during this time, watching and learning in preparation for life on their own.

Opossums are opportunistic omnivores: They eat anything. Adaptable and excellent survivors, they are part of nature’s beneficial cleanup crew. Opossums eat plants, fresh carrion, insects, reptiles, garbage, pet food, and much more. These typically solitary marsupials have a great sense of smell, are primarily active at night, and often go unseen. They are just as common in urban areas as they are in rural areas and can be found anywhere there is food and water.

A few misconceptions about these critters are that they are dirty, disease-ridden, and aggressive. Despite their somewhat creepy appearance, opossums are as well-groomed as cats. Known as droolers, they have a waddle that could give the impression of disease, but they are instead resistant to certain diseases, including rabies and Lyme’s disease, due to low body temperatures. This marsupial is extremely passive and rarely, if ever, an aggressor but will defend itself if attacked.

An opossum’s first line of defense starts with a gaping display of those frightening white teeth followed by a hiss that escalates to a growl and, if necessary, a screech. If attacked by another animal, such as a pet, the older opossum will fight back but is not often the victor. Under extreme stress, it involuntarily enters a catatonic state, much like fainting, which gives the impression it has died. In this state of shock, the animal secretes a foul-smelling mucus from its anal gland and gapes and drools. Its breathing slows, and the body stiffens to the point that it cannot be roused from this state for several hours.

In addition to “playing possum,” opossums have a few other truly unique features, including a long, bare tail that can grasp like an appendage. The tail is used for balance, climbing, grasping, and carrying things such as twigs. While the opossum’s prehensile tail is handy, it cannot support its body weight for more than a brief moment, dispelling the myth of the opossum hanging upside down while sleeping. Another special feature are its “hands.” The front paws are soft and resemble hands with five “fingers” and small, pointed nails. The front paws are not well suited for digging. The hind paws have a nailless hallux, or opposable thumb, and four “fingers,” which it uses much like human hands. It often grooms itself with its rear paws.

With this list of characteristics, it seems the opossum will be around for another couple of millennia.