Why turtles are crossing the road 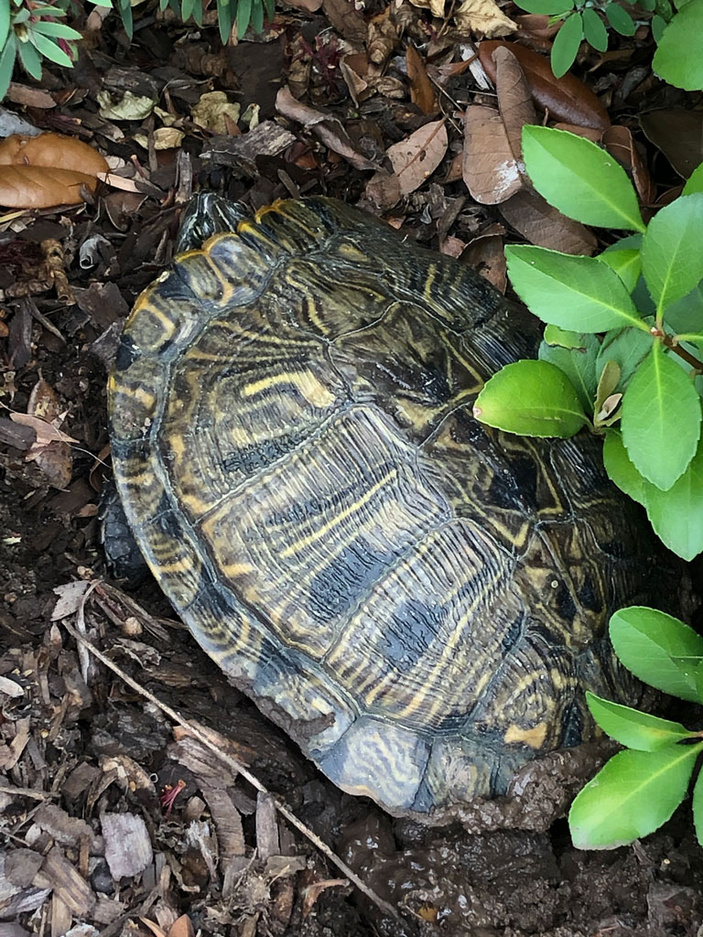 A Texas river cooter turtle lays her eggs in the flowerbed of a Meadowlakes home. Cooter turtles get their name from the African word kuta, which means turtle. In Texas, these are the most common turtles seen on rivers and streams as they are quite fond of basking in the sun. Staff photo by Jennifer Greenwell

Why turtles are crossing the road

June is a peak nesting month for Texas turtles, a time when turtle mothers-to-be head out in search of the perfect place to lay their eggs. One tell-tale sign is an increased number of turtles attempting to cross the road. In the Highland Lakes, those intrepid turtles are typically box, map, sliders, cooters, soft-shells, snapping, mud, and musk.

Female turtles will sometimes travel a mile or more to find the perfect spot to nest. Although turtles spend much of their time in the water, eggs must be laid on land to hatch.

Nest location criteria can be tricky in an increasingly developed landscape. Mainly, the spot needs to be well-hidden while also in situated in good sunlight. Once mama turtle deems a location acceptable, she digs a hole and deposits anywhere from four to 20 eggs. She then covers them with soil.

Unlike birds, turtles don’t stick around to see their babies born. Without a guardian, a large number of turtle eggs fall victim to predators such as snakes, raccoons, skunks, vultures, and even humans.

Baby turtles emerge from their shells after a two- to three-month incubation period. They are born with a temporary egg tooth used to break free of the shell. This event uses up a lot of energy and can take about 20 minutes.

A hatchling’s first meal is its egg sac. Some babies remain with the nest until spring, while others leave in the fall. Typically, when ready to leave the nest, the babies head for water in a group, counting on safety in numbers.

Turtles are built for long lives. Not only are they slow, they grow slow, which allows them to age differently than mammals. Smaller species of turtles in the wild often live 20-40 years. Larger species can survive beyond that.

Longevity can be cut short by hungry predators. A turtle’s natural defense mechanisms include retracting into the shell, escaping (although they are fairly slow), voiding (urinating), hissing, vocalization, biting, musk, and burrowing. In addition to predators, turtles often become victims of vehicles on the roadway — especially during mating and nesting seasons.

You can help turtle populations live a long, healthy life by following these simple tips: