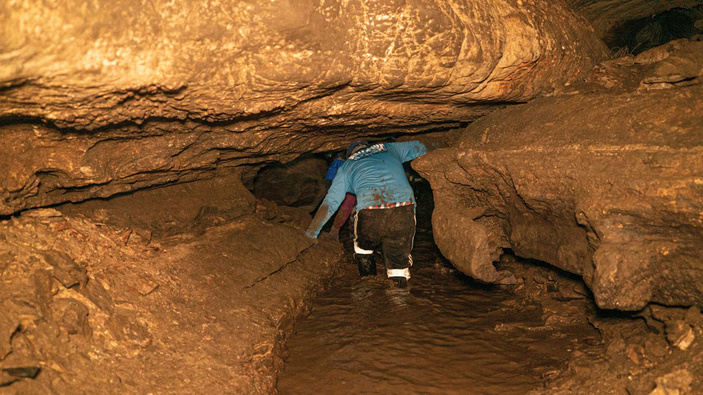 Paul Domingo, a native of Tyler, sloshed ahead of me through the partially flooded portions of the caverns. Depending on the weather, the whole cave system can be flooded out. Staff photo by Dakota Morrissiey

Beneath the winding rivers and rolling, rocky hills of the Highland Lakes hides a cool, dark, fascinating gem: Longhorn Caverns.

Tours of the cavern system below Longhorn Cavern State Park, located on Park Road 4 between Marble Falls and Burnet, entice the timid to the intrepid. Visitors can either take a walking tour — a casual-yet-impressive, 90-minute, guided trek through the more accessible parts — or a three-hour Wild Cave Tour that twists between tight crevices and sloshes through calf-high water.

I took the wild one, and it was a true adventure.

The caves are a beautiful melding of natural and human history that were carved out by an underground river. The only abrasion-formed cave system in the United States, the caverns were used as a fully functioning nightclub in the 1920s. The Confederate army mined bat guano from the caves to use as gunpowder in the 1860s. Comanches held council meetings in the large spaces among the “living stone.”

Today, the adventuresome don hardhats, head lamps, gloves, and knee pads to descend into the depths. This is not a minor foray along well-walked paths. Don't go if you're bothered by the dark, getting dirty, or squeezing through tight spaces.

The Wild Cave Tour was an unexpected adventure for me. I had no experience with cave exploration, so I tended to have my mind blown at every stop along the way.

I was part of a group of eight accompanied by an experienced cave guide. Safety was a priority. It was made clear at the beginning that we would be navigating tight spaces, wading through water, crawling through mud, and making complex descents. Also, we were going to have to stick together.

The main caverns are well lit and full of displays and clearly marked walking paths. The Wild Cave Tour at times followed these standard paths, where we encountered other visitors as they made their way through.

We soon left the beaten path, crawling through man-size openings and making our way single file down tunnels. Tour guide Matthew Coonrod demonstrated how to make the two main descents, Saddlehorn and The Chute. It was at this point that what I thought would be a tourist experience began to feel like an expedition.

We faced stretches of discomfort when we were hunched and crawling through the mud or bouncing our heads off low-hanging rock, but these instances are what turned an experience into an adventure. We had many laughs and no tears on this trip.

The tour is punctuated with surreal moments. Toward the end, we all turned off our lights and laid down in complete darkness. Everyone was silent, and I think we all could have easily taken the best nap of our lives.

We made our way through chambers walled with glittering calcite crystals, watched nugget-size, tri-colored bats flit by, and saw portions of the cave "alive” with growing rock formations fed by drips of water. When the tour ended, we emerged from the darkness blinking away the sunlight that greeted us on the surface. We were tired, we were dirty, some of us had a few bumps on the head, but we were also exhilarated by the challenge and the beauty we found below the Earth’s crust.

THINGS TO KNOW WHEN YOU GO