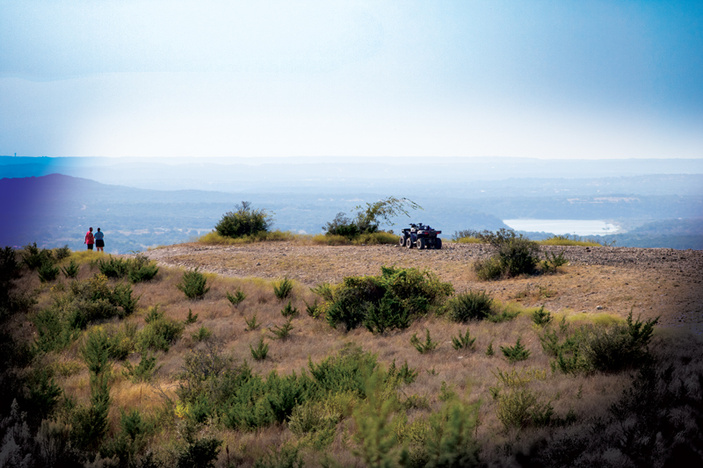 Wildcat Mountain looms large over Hidden Falls Adventure Park at 1,410 feet above sea level. As one of the highest points in Burnet County, the views at the top are a reason people love riding the trails at the park. Staff photo by Jared Fields

Standing atop Wildcat Mountain, one of the highest places in Burnet County at 1,410 feet, you can see miles of the Highland Lakes.

It’s a view that’s well worth the bumpy ride up the mountain in a Jeep or on a dirt bike or ATV to look from Lake Travis to Horseshoe Bay.

The 2,100 acres and over 200 trails of Hidden Falls Adventure Park in Marble Falls was never intended to be anything more than land for cattle.

“We were in the process of clearing land for cattle, and we had a group that was trying to some stuff out here,” said Brooks Blake, owner of Hidden Falls Adventure Park and Copperhead Creek Shooting Club, which is located nearby.

Dirt bike riders approached Blake about putting some trails in and riding on the property. What trails the property had were used for working cattle.

“It just happened,” Blake said. “It started and sprouted and grew without that intention of ending up with what we had.” 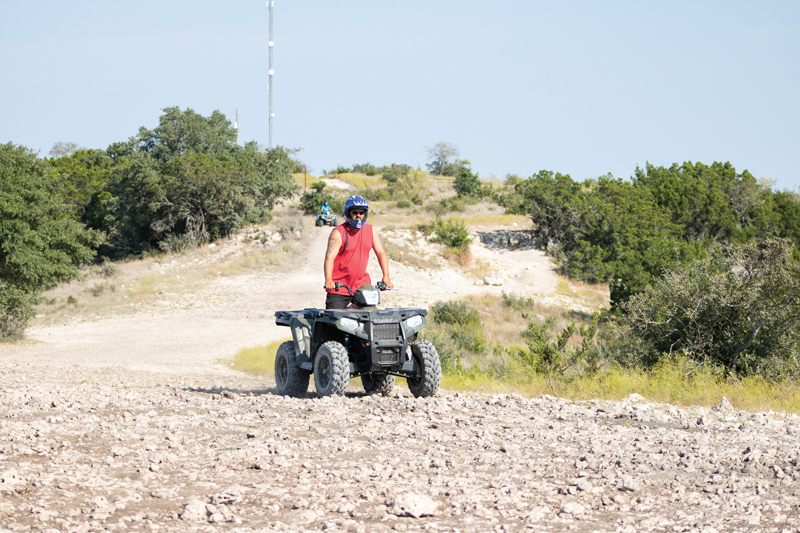 Blake had retired from the medical field and planned to ranch and live out his life on the property. The trails quickly grew from accommodating motorcycles to ATVs then to full-sized vehicles such as Jeeps. As the business grew, Blake decided to be at Hidden Falls full time. That meant finally getting a Jeep for himself after the business’ first five years.

“So I made that decision, and it’s just been good ever since,” he said. “I’m much happier.”

Copperhead Creek Shooting Club also grew. The club has developed from just a shooting range to include sporting clays, five-stand, skeet, and trap. Of the property’s 2,700 total acres, the gun club covers 600.

“It’s slowly evolved into these two separate entities out here, but both have just continued to grow nice and steady,” Blake said. 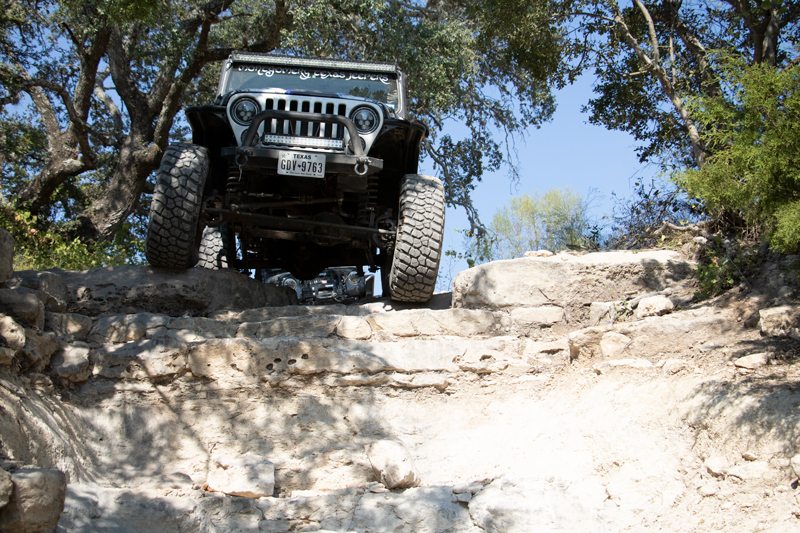 Since the founding of Hidden Falls in 2007, Blake has seen the property transform from a ranch into a destination enjoyed each year by thousands.

A slow weekend might have 300 people on the property. Busy weekends can see that number pushed to 1,000. Between Thursday and Saturday, the campground goes from empty to a small town.

Every weekend, the nearly two-dozen employees interact with hundreds of visitors from Austin, San Antonio, Dallas, Houston, and the rest of Texas, who are all excited to be at the park.

“Because our customer base is pretty good, and they’re excited to be here, it creates excitement in the office,” said Jim Coursey, who’s worked at Hidden Falls since 2015. “And that’s one thing we’re able to carry out in the park and what we do.”

To Blake, the employees are “a blessing.”

“I have the luxury of having a staff that wants to be here,” he said. “They rarely call in sick, and, sometimes, you have to send them home because they like it out here.”

To keep up with growing demand, much of the improvements over the years have been to the amenities. A structure originally built to store hay is now called “headquarters.” Hookups for RVs have been added as have cabins and bunkhouses. 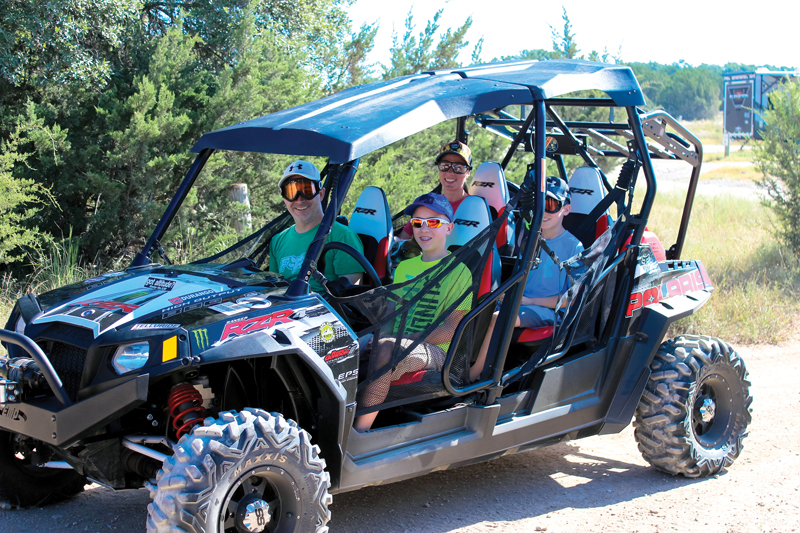 Families can ride the trails together at Hidden Falls Adventure Park. This Polaris Razor is made to handle most of the trails at the park. Photo courtesy of Jim Coursey

Brooks said the park caters to all types of people: those who like camping and sleeping on the ground or people who want a tent.

“We love seeing families out here, kids on ATVs or dirt bikes or whatever,” Blake said. “That’s what we like. That’s building memories for them.”

More building is planned for the park, including adding a sort of general store and a water plant for an improved supply.

No matter how much is added, it’s the park’s best feature that will continue drawing off-road enthusiasts: the terrain. “It’s a good place to come and check out your stuff,” Blake said with a laugh.

The steep ledges and granite outcroppings are a crawler’s paradise. Dirt bike riders enjoy the technical aspects of the trails. Stock vehicles can enjoy the trails with bypasses around the more treacherous terrain. Dirt bikes and ATVs can ride on exclusive trails made just for the riders. Or, as Blake suggested, people with the biggest, baddest four-wheelers can test their equipment and skill on some of the park’s most challenging features.

Based on the past 10 years, Blake doesn’t have a master plan for the trails, gun ranges, or property. Everything to this point has happened by chance, so why change the model?

“The atmosphere is created by the owner, and because the owner is laid back in how he feels about this place, it creates the atmosphere that it’s just pretty laid back,” Coursey said.

WHERE: 7030 RR 1431 East in Marble Falls
CONTACT: (830) 265-4950
WEBSITE:copperheadclub.com
HOURS: Dependent on the month. Check out the website. (Memberships available for use of ranges during closed hours.)