Snake breaking trains dogs to avoid trouble on the trail 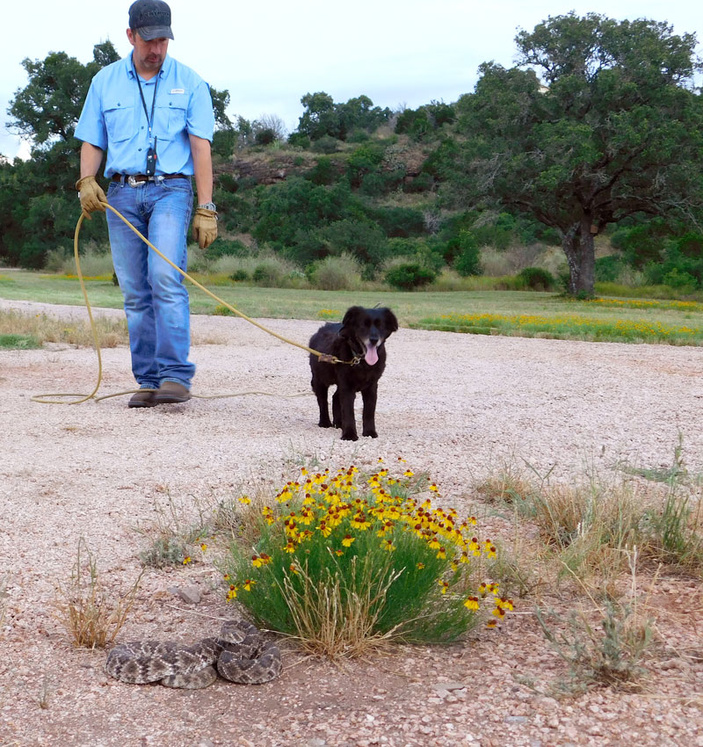 Snake breaking trains dogs to avoid trouble on the trail

Walking her property just north of Marble Falls, 8-year-old Sophee, a miniature Australian shepherd, came unawares upon a tightly, coiled rattlesnake. She only noticed the angry reptile as it began to strike.

In this case, there was no tragic ending. Sophee was leashed, and the snake had been defanged as part of a snake-breaking class for dogs taught by expert Fred Reyna of Kingsland.

Snake breaking, or snake-aversion training, teaches dogs how to avoid being bitten by a snake. A session with Reyna lasts 15-30 minutes and conditions dogs to stay away from snakes. Because dogs are not instinctually afraid of snakes — and are naturally curious — they need to be trained to avoid them.

“Snake breaking creates an aversion to snakes,” Reyna said. “It’s better to be proactive and avoid the snakebite in the first place.”

Although 80 percent of pets survive quickly treated snakebites, even a bite from a non-venomous snake can harm a dog. Bites cause swelling, bruising, and can lead to infection. Bites from a venomous snake usually cause bleeding or bloody discharge along with rapid swelling and can lead to death if not discovered and treated in time.

Reyna uses an electronic shock collar for training. On a leash, the dog is allowed to approach a venomous, defanged snake. The moment the dog shows interest in the creature, it’s given a shock, linking the sight, smell, and sound of the snake with a negative stimulus. By the end of Sophee’s training session, she had learned to stay far, far away whenever she picked up the reptile’s scent.

Shock collars are the best way to train dogs in snake avoidance, said Chuck Schifferling, a dog trainer at Barkingham Palace in Marble Falls. He doesn’t offer the training at his facility but recommends it to his clients, especially those who own prey-driven dogs such as terriers, hounds, retrievers, and spaniels.

“Avoidance training (using an e-collar) is best in teaching dogs to make immediate split-second decisions,” he said. “Clicker training is best used to teach dogs to follow commands. Unfortunately, we are not always around to either command or reward our dogs when they encounter snakes.”

Electronic collars deliver a mild shock to get a dog’s attention. It is not a punishment and not strong enough to harm the animal. Shock collars became popular in the 1960s for training hunting dogs.

All breeds of dogs 8 months and older are eligible for snake breaking, according to Reyna, who learned the technique from a veterinarian he worked for years ago. He has been snake breaking dogs for over 20 years and is one of only a few instructors in the Hill Country. He has traveled across much of the state to hold training sessions.

Learn which snakes make their homes in the Highland Lakes.