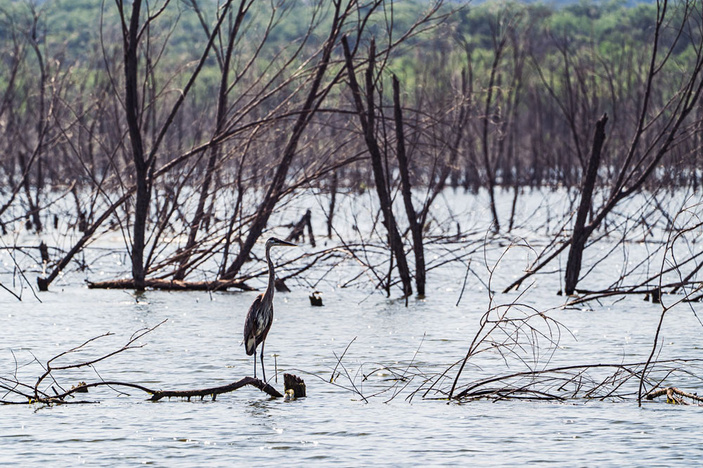 A great blue heron hunts among the dead brush and trees in Lake Buchanan at the mouth of the Colorado River as it feeds into the lake. Photo by Ronnie Madrid/Divine Radiance Photography

Tree- and brush-strewn areas in Lake Buchanan provide good hunting grounds for the great blue heron. The trees and wooded areas around the largest of the Highland Lakes are habitat for heron bird colonies, which is why they are often spotted on the lake.

The largest of the herons in North America, great blues stand 3-4½ feet tall and have a wing span of about 6 feet. They are often seen standing stock-still, necks stretched, and blade-like beaks poised in a hunting stance. Watch long enough and you will see that beak quickly snap up a fish, small rodent, or reptile.

Although the great blue heron hunts alone, it nests in communities, building its homes in trees and living in groups called heronries. Both the male and female take turns incubating the two to seven small, pale greenish-blue eggs laid each year. Afterward, they both feed the hatchlings.

Monogamous for at least that one year, a pair of herons feeds its young for up to four months until the little ones take flight. They will then continue to feed them another two weeks before letting them out into the world to fend for themselves.

After a breeding season together, the birds often split up and find new partners, a pattern that repeats over the lifespan of an adult bird, which lives about 15 years.

The birds are much easier to identify when they are hunting by their outstretched necks and statuesque postures. When flying, they pull their necks into an S shape and stick their long legs straight behind them, leading casual observers to mistake them for egrets. Birders, however, are rarely fooled.

The great blue heron is listed as a species of “least concern” by the International Union for Conservation and Nature. However, it is illegal in the United States to kill a great blue heron. The bird is protected under the U.S. Migratory Bird Treaty Act, which was passed in 1918 and is one of the oldest wildlife protection acts in the nation.

A federal law, the act prohibits killing or capturing protected migratory bird species without the approval of the U.S. Department of the Interior's Fish and Wildlife Service.