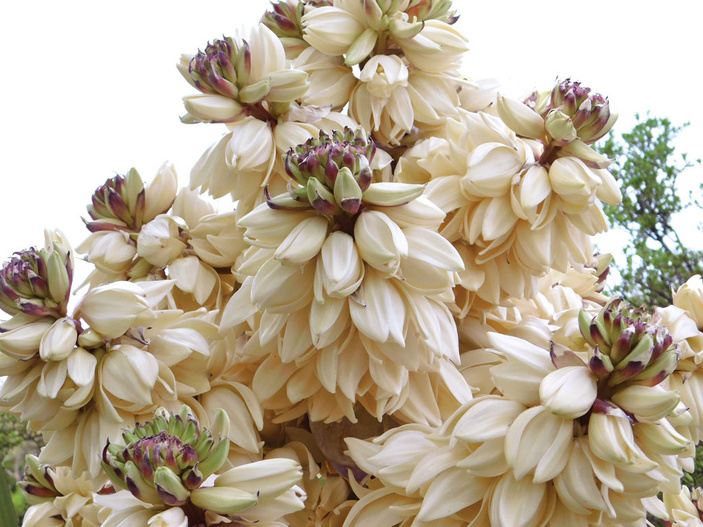 The Spanish dagger yucca's blooms sit atop its leaves. Its stalk is covered by the flowers, which are creamy white, sometimes with a purplish tinge. Staff photo by Jennifer Greenwell

Four species of yucca call the Highland Lakes home: Buckley’s, twisted-leaf, Spanish dagger, and Arkansas. If you are wondering why red yucca is not on the list, well, it’s not a yucca. In fact, it is known as a false yucca. All of them, however, are classified as wildflowers and lend the same beauty and majesty to a Texas Hill Country spring as any bluebonnet, Indian paintbrush, or wine cup.

Yuccas are sometimes mistaken for agaves, and while the plants are related, they are quite different. Yuccas and agaves are both succulents and members of the same plant family, the Asparagaceae, also called the asparagus family.

A quick look at the leaves is an easy way to tell the difference.

Yuccas have long, narrow, less fleshy leaves with sharp, pointed ends. Agave leaves are fleshy and typically have more pronounced teeth along the edges. Yuccas have a stem, although sometimes not noticeable, while agaves are stemless.

Yucca plants bloom yearly, agave plants only once in their lifetime. Yuccas grow primarily in height, while agaves grow in height and diameter. The blooms on agave plants are tubular-shaped in shades of yellow and red, while yucca blooms are bell-shaped and white.

Another key difference is pollination. All four types of yucca found in the Highland Lakes rely solely on a special species of moth for pollination, the aptly named yucca moth. Agave plants are pollinated by a variety of creatures: bees, butterflies, birds, and more.

And, yes, the continued existence of yucca plants, the iconic flower of Central Texas landscapes, rests solely on the tiny, white wings of a singular moth. The yucca moth, or Tegeticula, is small and unremarkable looking. It emerges from its cocoon when yuccas begin to bloom. Depending on which of the four types is in bloom, this could be anywhere from January to October.

Most moths have long tongues for collecting pollen. The female yucca moth has special tentacles around its mouth that specifically allow it to pollinate yuccas. These insects have very short lives and no need to feed. The female collects pollen from several flowers on one yucca plant and carries it in a clump with her tentacles to another yucca plant. She deposits both the pollen and some of her eggs, thereby cross-pollinating the plant and ensuring the continued existence of both yucca and moth.

Once pollinated, the plant will produce fruit and seeds. The larvae fuel up on the seeds before moving to the next stage of life in an underground cocoon.

Here’s a brief look at how to distinguish one yucca from the other: 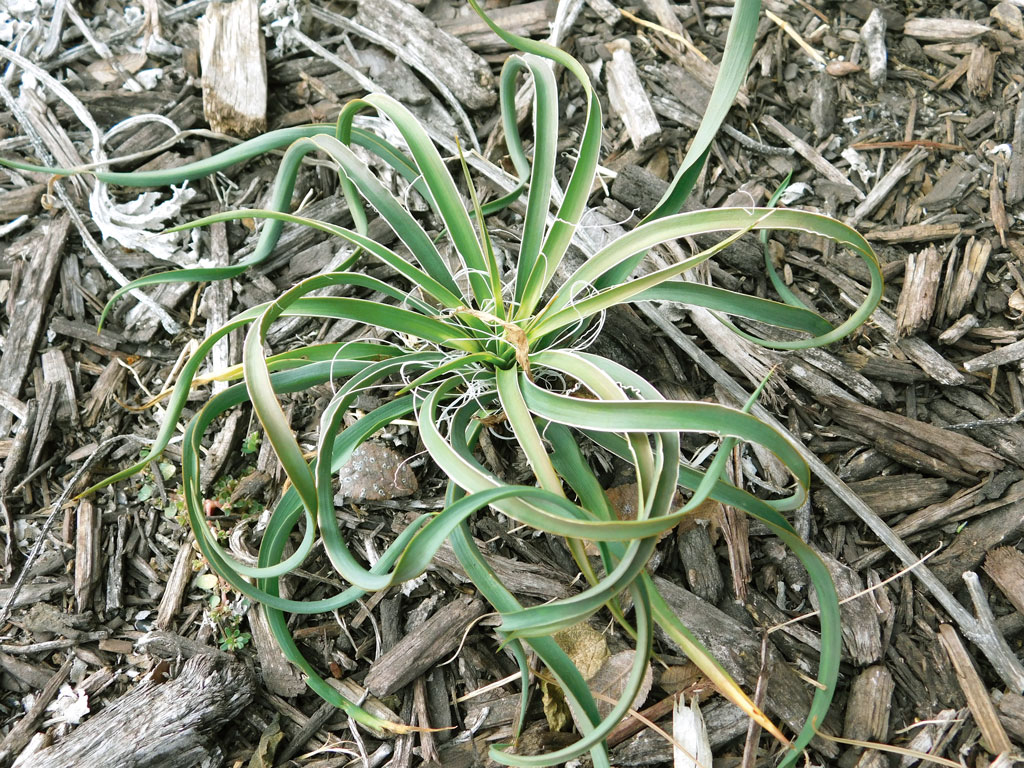 Twisted-leaf yucca (Yucca rupicola) is only found naturally in the Edwards Plateau region of the state. Also called Texas yucca, it sports long, narrow, bright green leaves with yellowish to red edges. The leaves become twisted with age, which might be an adaptation to funnel rainwater to the plant's roots. The bloom stalk of the twisted-leaf yucca ranges from 2-5 feet tall. It typically blooms from April-June. 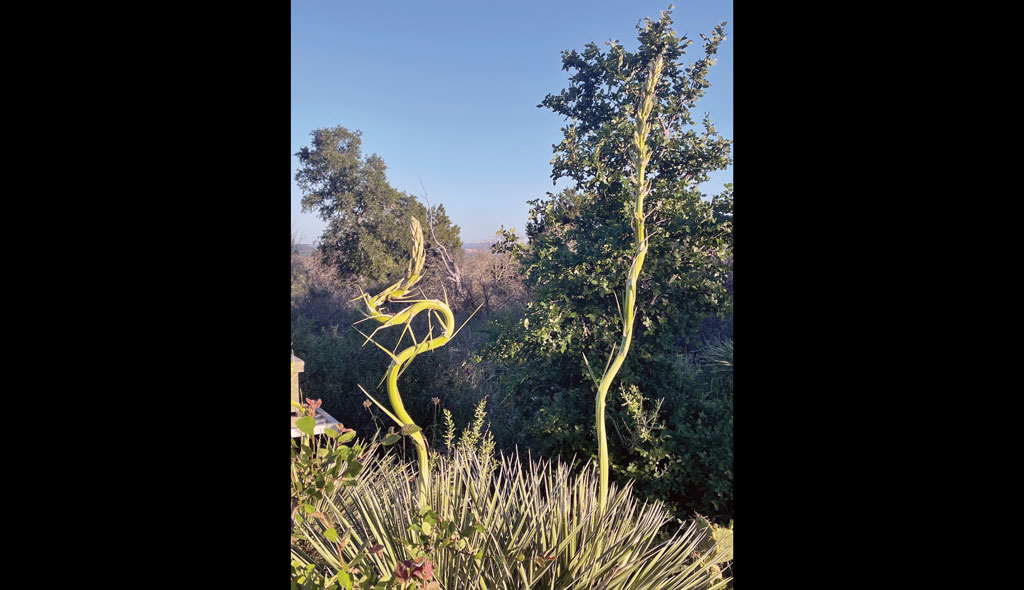 Buckley’s (or Buckley) yucca (Yucca constricta) has green leaves that are about 2 feet long, narrow, and stiff with curly, white threads along the margins. The ends are sharply pointed. The bloom stalk ranges from 5-8 feet tall. Multi-branched blooms tend to be white with a greenish tint. It typically blooms from April-July. Pictured here is an anomaly or fasciation that was noted following a winter that included an atypical period of freezing weather. Typically the stems of yucca are straight. 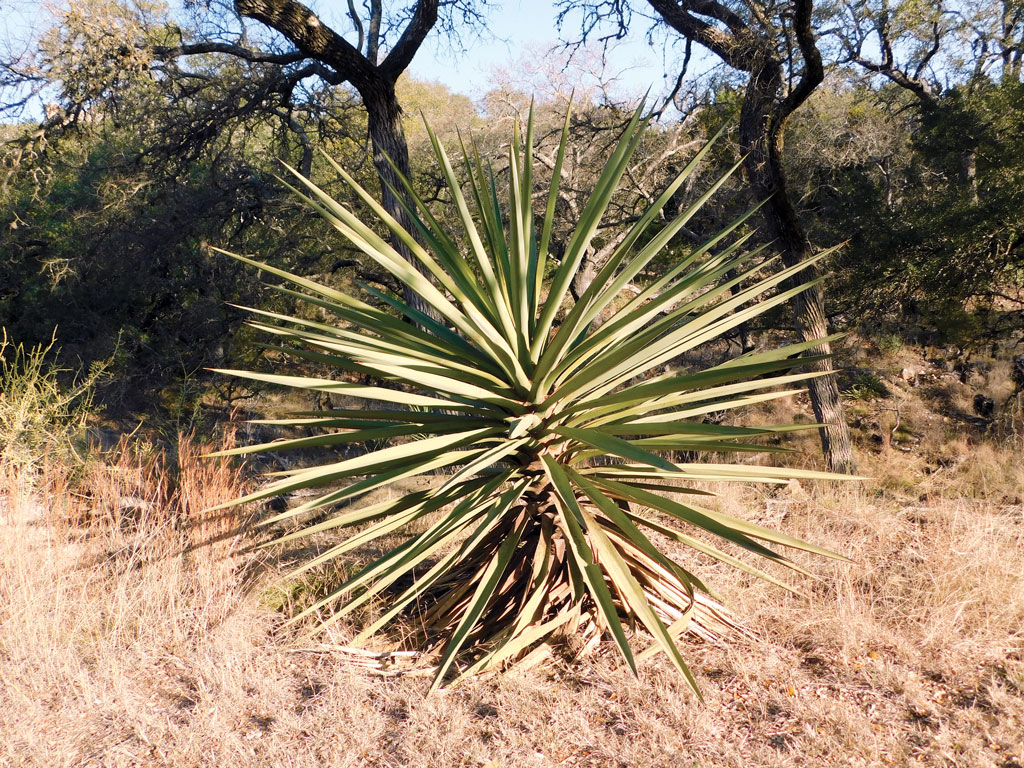 Spanish dagger yucca (Yucca treculeana) has several names: Trecul yucca, Don Quixote’s lance, and Spanish bayonet. It is considered a small tree and has pale bluish-green, more concave leaves that are stiff and sharply pointed. Leaf tips are capable of puncturing flesh. Leaves can reach up to 3 feet in length. The 2- to 3-foot bloom stalk rises just above the leaves and blooms in a thick cluster covering the stalk. Blooms might have a slightly purplish tint. It typically blooms from January-April.

Arkansas yucca (Yucca arkansana) is sometimes called soft leaf yucca. It is one of the smaller yuccas in the area. The bluish- or yellowish-green leaves range from 8-24 inches long and are thin and flexible with white edges lined by curly threads. The tips are sharp. It is usually stemless; bloom stalks are about 2-3 feet tall. Flowers along the stalk are greenish-white. This yucca does not typically bloom every year, but when it does, it is usually between May and October.

By the way, yucca plants contain toxins called saponins, which can cause an allergic reaction with pain and swelling lasting up to a week, so watch out for those pointy leaves.