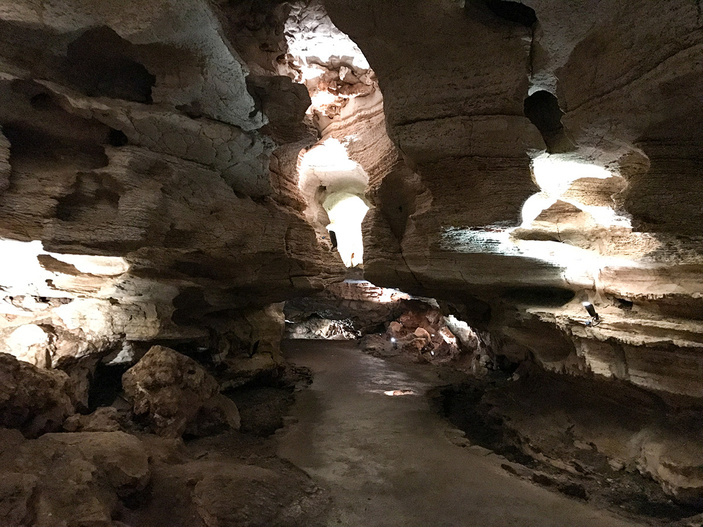 Longhorn Cavern State Park is a unique flow cave in the Hill Country. Its distinctly smooth walls and level path are characteristic of the way it was formed by rushing water. Photo by JoAnna Kopp

Tour 135 feet deep into the earth at Longhorn Cavern State Park in Burnet County. The limestone cave is filled with minerals, including smooth dolomite and glittering calcite crystals. Lighting throughout the tour illuminates colorful striations and dripping stalactites.

With the interior at 68 degrees year-round, it’s a great refuge from the summer heat or winter cold.

“You’ll notice when you get down there that it doesn’t look like those other caves,” said park manager Evan Archilla, comparing Longhorn Cavern to others such as Natural Bridge Caverns northeast of San Antonio, Inner Space Cavern in Georgetown, Caverns of Sonora, and Carlsbad Caverns National Park in New Mexico. 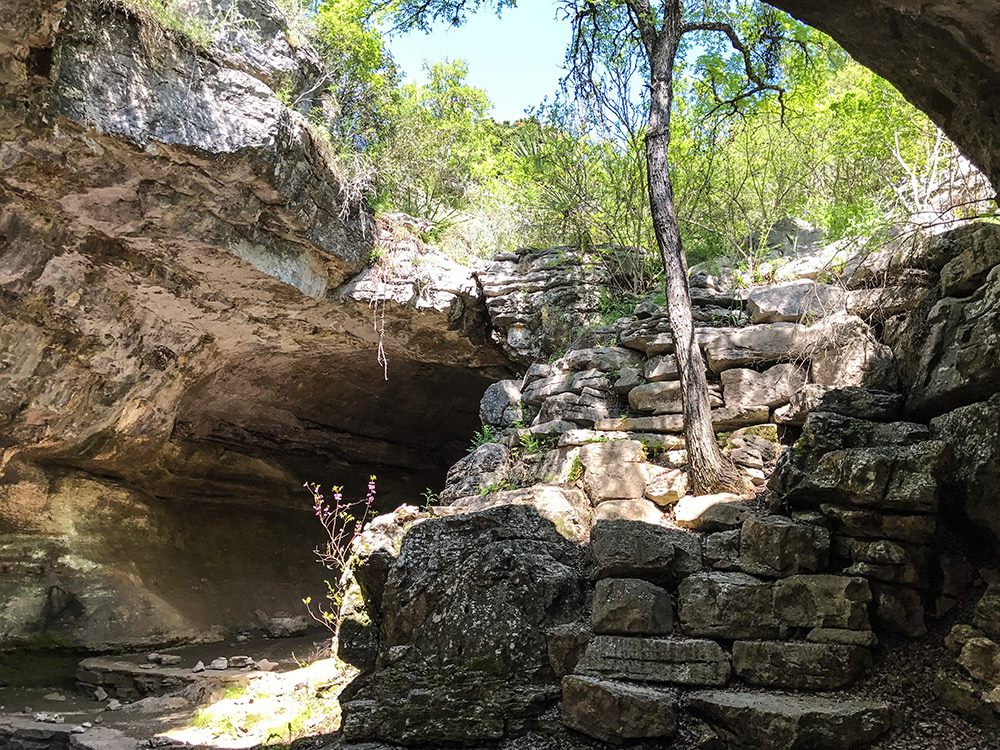 Begin your initial descent into Longhorn Cavern through a natural sinkhole at the cave’s entrance. Photo by JoAnna Kopp

“What’s unique about our cave, in particular, is that it’s a flow cave formed by a river,” Archilla said. “Carlsbad Caverns, for example, are called solution caves, or drip caves, meaning that the water sank through the earth and dissolved out big caves and formations. Longhorn Cavern is much more sculpted, and it’s a very long, fairly level cave”

Take a walking tour of Longhorn Cavern. Tours are led by knowledgeable and enthusiastic guides, who explain the history and unique geology along the way. 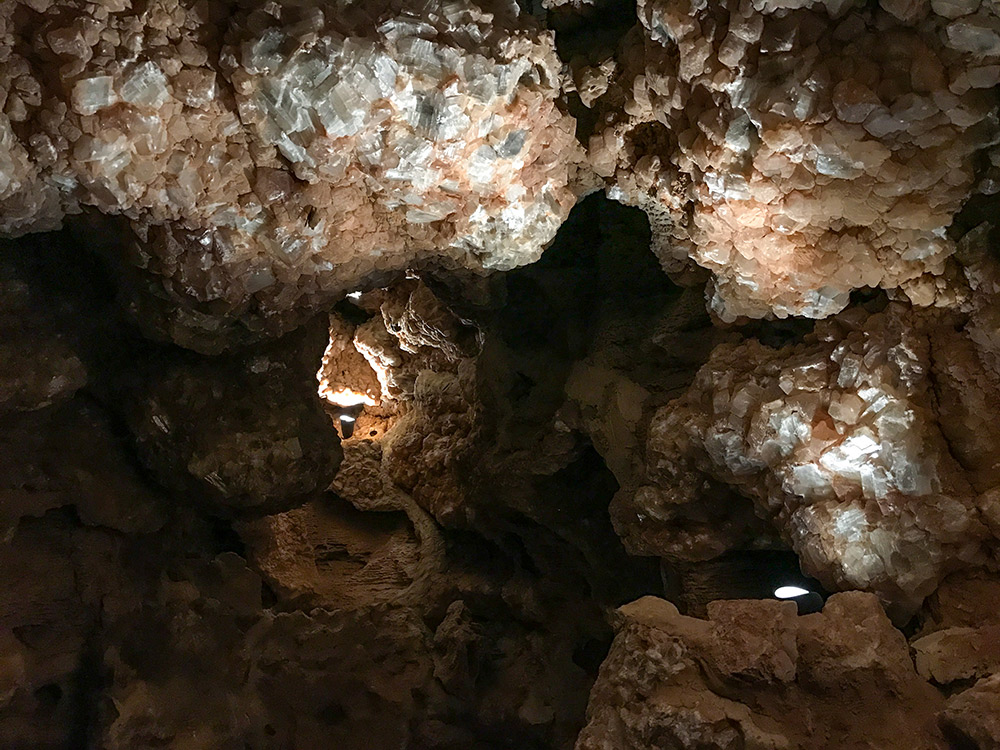 Looking for adventure? The Wild Cave Tour explores the basement system of Longhorn Cavern. You’ll have to crawl on your hands and knees wearing elbow and knee pads, helmets, and head lamps. Wild Cave Tours are by reservation only. 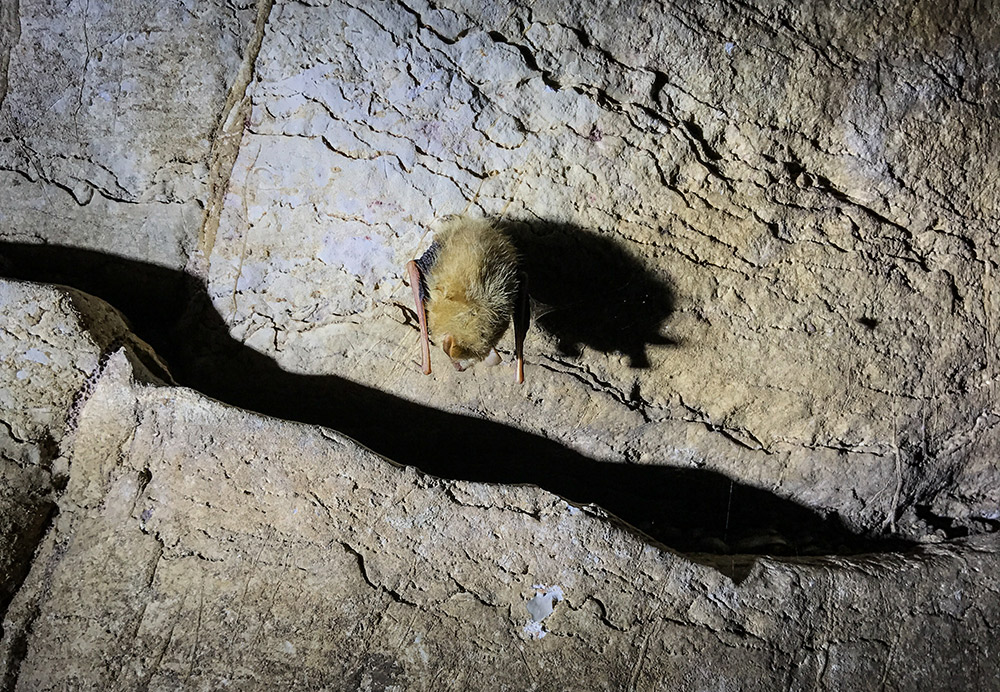 Longhorn Cavern is home to many animals such as the tiny tricolor bats, also known as the Eastern pipistrelle bat. Other animals that make their homes inside the cavern are blind salamanders, blind catfish, blind shrimp, field mice, and cave crickets. Photo by JoAnna Kopp

There is no park entry fee. Fees for tours vary depending on the tour type. Gratuities are not included in your ticket price, but the tour guides work hard to give you a fun experience so don’t forget to tip to show your appreciation.

Longhorn Cavern State Park is a day-use-only park. No overnight camping is allowed.